Delivery of Navionics regions 2011 has accompanied a significant change in pricing : significant decrease in the price of charts for iPhone, increase for iPad.
Europe regions (43XG, 44XG, 46XG, 49XG) decrease by 60% for iPhone and increase 35% for iPad. Surprisingly, the British have their region 28XG for iPhone down only 22% ($31), but more than double for iPad ($84). Damned ! 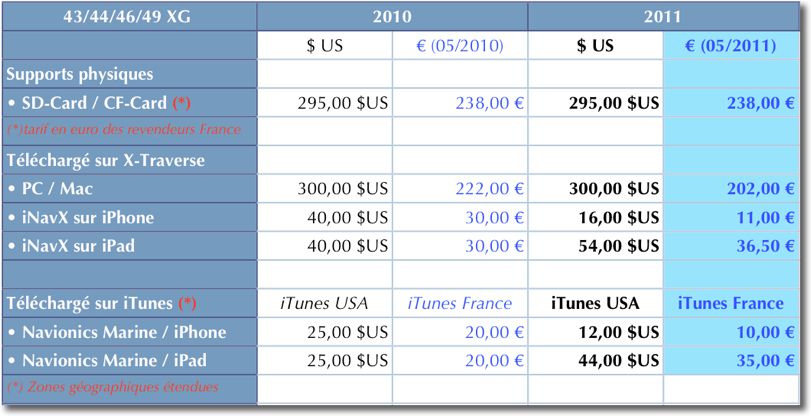 Prices of major maps of Europe, except the British Isles

The prices gap iPhone / iPad joined this of Marine Navionics charts on iTunes AppStore. With iPad, despite the current low dollar, the increase is still more 20%.

It should take advantage of the exchange rate particularly advantageous, right now, to renew its portfolio of cards with versions 2011. I hope Navionics does not intend to create new updated charts region each year, as this may become a prohibitive rent, and many users would be reluctant to update their charts, to save their purse to the detriment of their safety.