Company Fugawi, Navionics dealer through its website X-Traverse, has just released information on the forum iphonesailing.net in regard to the new charts pricing policy, most about Navionics for iNavX 3.0 with iPad.

»All maps available on X-Traverse will be supported on iPad at no additional cost, with the exception of Navionics charts.

If you already own a license for a non-Navionics chart region for use with iNavX for iPhone, such as CHS, NV-Digital, Maptech or Hilton’s Realtime-Navigator, it will work perfectly on iPad iNavX, without any extra cost. Simply start iNavX on the iPad and download the region. This assumes that you still have at least one of your two activations available (Whenever you purchase a chart region from x-traverse, you are provided with two activations, meaning you can use the charts on two supported devices which are owned by you).

Navionics has introduced a new tier of pricing for use with iNavX on iPad. All of the Navionics regions are priced at 49,99 $ for use with iPad (with the exception of two European regions, which cost a bit more). Navionics regions purchased from X-Traverse for iPhone WILL NOT run in iNavX ver. 3.0 for iPad – not even in ‘small screen mode’.

Any customer who has already purchased a Navionics region edition 2010 for iPhone and who wishes to use it on iPad can request that their activation be transferred tot he ipad version. Send your request to support@x-traverse.com. This free upgrade only pertains to those customers who purchased chart region edition 2010 for iPhone prior to May 1 2010. After May 1 2010, the X-Traverse pricing for iPhone vs. iPad was available on X-Traverse and the X-Traverse shopping cart was updated to explicitly separate the iPhone and iPad pricing for Navionics charts.

To summarize, the all X-Traverse charts will work on iPhone or iPad at no additional cost, provided you have not used at least one of your two product activations, with the exception of Navionics charts which are now 49,99 $ for use with the iPad. "

Here is the new price comparison panel 2010 in relation to previous price 2009. Prices in euro are average prices, based on the average rates of currencies for relative periods, except for iTunes AppStore whose prices are fixed in euro. 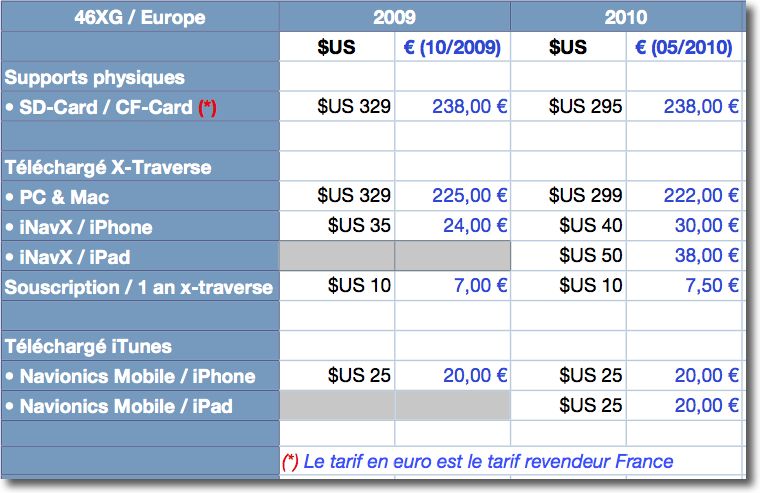