This year the striking news arrived during the summer, While boaters at sea, for most often far from internet. I view finally after several weeks of absence, the most interesting of them. A little late, you could say, for those who are returning to work !

This new version finally arrives with an excellent French translation in addition to seven other languages. The language does not come by default with the iOS, but by voluntary selection in the settings. Particularly convenient to learn Navy terms in other languages !

iSailor joined iNavX applications (¹) and SEAiq (²) by integrating a display AIS by Internet service. Unlike the two applications mentioned, This is a pay per annual subscription option. Needed, of course, have a connection Internet WiFi or cellular, which limits usage to strictly coastal navigation. In my opinion this is never as accurate as a good receiver or AIS transponder on board equipped with a WiFi interface, but for small vessels not equipped with, It is always better than nothing.

As iNavX (³), iSailor has chosen the company Theyr.com to provide a view in streaming the weather on mapping. Pay monthly or annual subscription option, at a rate similar to that provided on the X-Traverse website for iNavX (Theyr Standard). If the display is much more polished, It is regrettable that we cannot superimpose wind + pressure + precipitation, which would provide a better visualizer of the frontologie. If it refers to the detailed description provided on the X-Traverse website, These forecasts appear to be derived from the GFS model with mesh size of 0.5 ° in 0.1 °. However, There zooming that mesh is closer, I suspect a linear interpolation of intermediate data and fine-mesh. It would be desirable that Transas provides clarification on the models used. 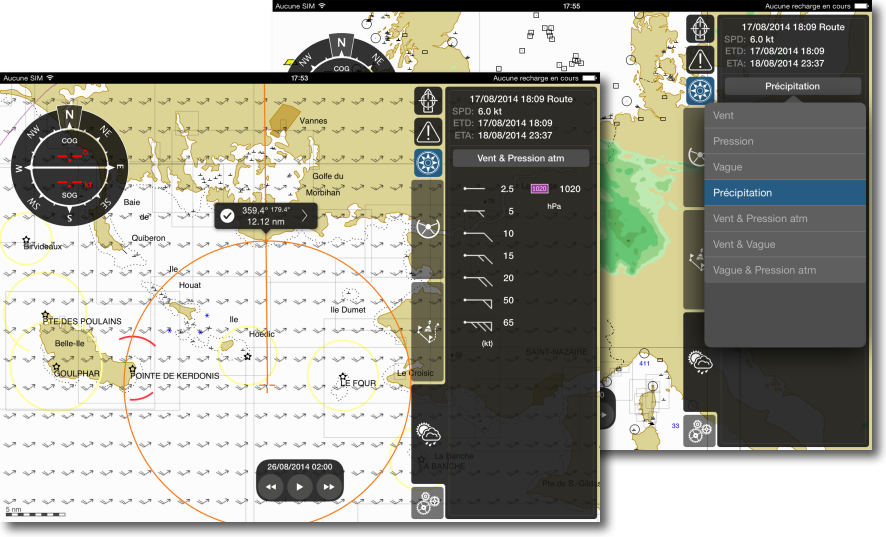 Several other improvements have been made, which you will find the list in the newsletter Transas or on AppStore. Despite a few flaws display in the always troublesome mapping, iSailor represents the most important competitor of iNavX by features and especially a much better ergonomics. But the multiplication of the paid options may put off potential customers.

This time it's official, both applications merge : Marine and Boating. It had become clear that these two have become recently identical applications could long live. They are more than one now. As I had mentioned in a recent post (²) the transformation of multiple Navionics applications in a single, for free, to which we add the desired region mapping and paid options helped Navionics to align competition, homogenize its offerings and also revive sales. This application, undisputed sales leader, Unfortunately made the choice of a complete closure to the outside (AIS, NMEA, File Transfers) which does not allow him to meet demanding mariners.

On the other hand, It seems that the purchasers of one or the other found the entirety of their purchases (charts and options) in a “Navionics +” pack now including SonarCharts™, Community Edit and a year of update from date of purchase (the update or 7.1 from 14 July 2014).

It is not the application for GPSNavX and MacENC, but the web site x-traverse.com makes its - small - revolution. This well known website by users of iNavX and Mac applications has improved its interface and amended its terms of use.

Despite its questionable ergonomics, This charting service still offers the advantage of allowing a wide choice of charts and maps for iNavX, GPSNavX and MacENC, and so not be dependent on a single editor, even if Navionics remains the choice of the majority of European users.

This essentially. Now take the fall fairs to perhaps seeing surprises, rather than cosmetic improvements. Who knows ?

4 Replies to “iSailor, Navionics, X-Traverse, What's new in the summer”