Which to choose ? Raster ? Vector ? What costs, for which application, how to Navigation ? As many questions as most of you arise, and rightly. I will try to shed some light.

While visiting my website pages devoted to charting (¹) on my website achieves the full information and links to various suppliers, a synthesis is needed here.

First of all, specify the types of charting related to applications that concern us :

To date, the choice of raster charts covering the world is relatively small. Unlike Americans who have, with NOAA, complete and free Raster charting of the American coasts from Bermuda in the East to Hawaii in the West, only Maptech Navigation Inc. provides cartography covering the most popular spots on the planet, but unfortunately not all. Otherwise, these charts are in majority in BSB format 4.0, they date back several years for certain non-updated. It is imperative to ask the suppliers list and dates of last charts corrections available in each portfolio.

The main areas of Maptech charts

Apart from the U.S., Canada, and some areas covered by the Swedish and German charting, raster charts offer less and less interest. The digitization of paper charts is a long and expensive process, Softcharts have gradually disappeared, SHOM has dropped from 2002 CDs released from 1998, and vectorization tends to spread among publishers, both public and private.

S-57 ENC charts are provided by RENC Primar and sold through a network of authorized distributors. In France, ScanNav, among other distributors, is particularly turned yachting. These charts are provided in the form of "cells" to download, either unit, either in the form of portfolio. The price includes a subscription period for updates and take account of this period : 3, 6, 9 or 12 months. Beyond, charts are no longer updated, but can still be used. Worry, they do not self-destruct !

Charts selection can be made directly on Primar website, online, or downloading a catalog to make a selection offline. 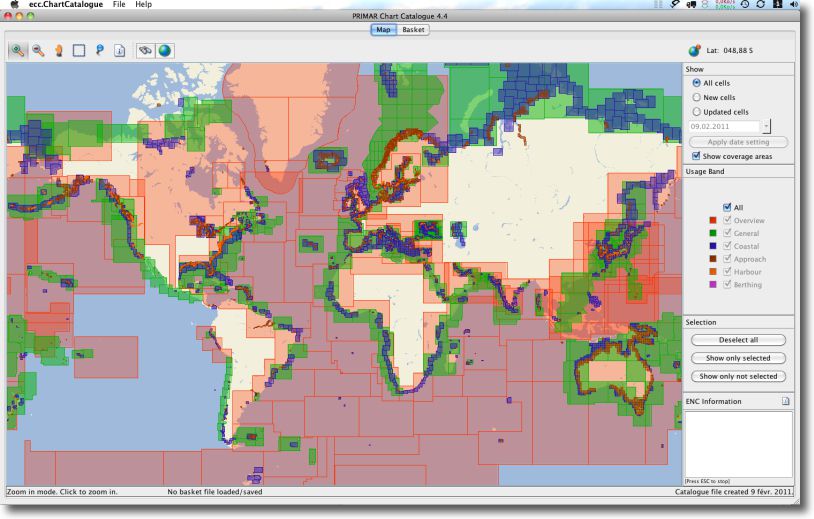 Primar catalog to choose charts by area or route 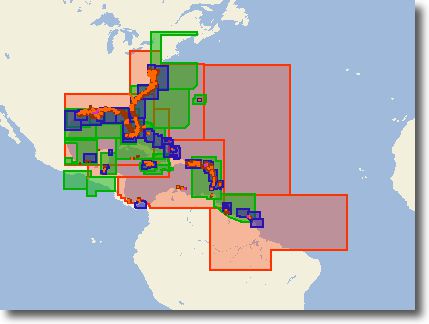 Choice by drawing a path

Charts selection can be done, or by selecting an area which automatically selects the charts and adds a detailed list to shopping cart, or by using the tool to plot a course, as in the two examples below. 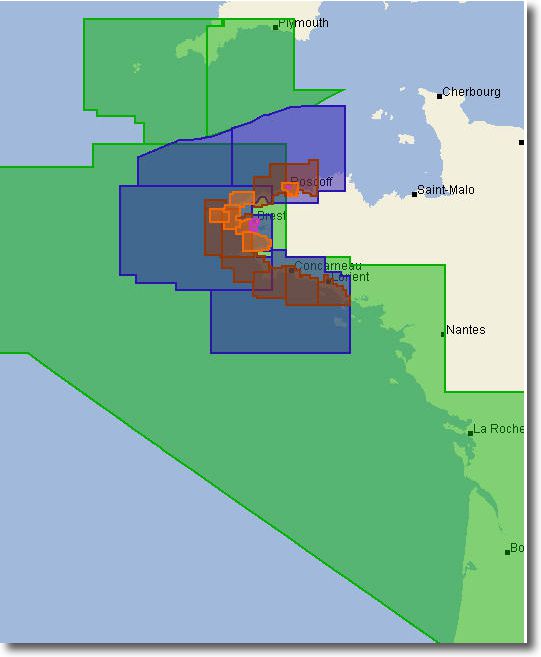 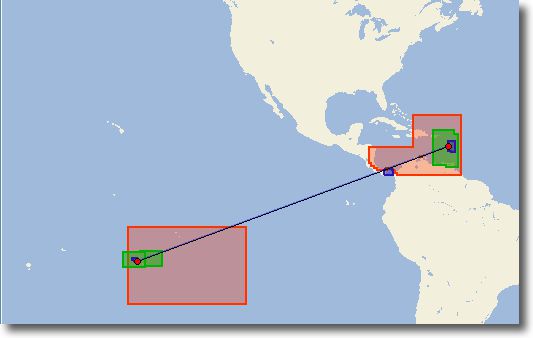 Unfortunately, some areas are not covered by official ENCs, such as the Gulf of Morbihan, or large area crossing the eastern Pacific, Panama to the Marquesas. See the opposite example.

Official ENC charts offer the advantage to replace paper charts, a permanent updates service for time, at the user's choice, may be renewed if necessary. This is the solution of professional vessels. A contrario, the cost is enough of a deterrent if you need to cover large areas of navigation, an Atlantic crossing back and forth, for example.

If you are unfamiliar with English, once your list of selected charts in the shopping cart, you can contact ScanNav that will provide them to you and help you to install them.

German distributor, now owned by the investment company Dutch-Belgian-Trading GmbH, ChartWorld distributes the full catalog cards ENC S-57 and S-63 official, Navionics Private ENC, and its own ENC ChartWorld Charts.  These cards are available in two formats : DirectENC and S-63, compatible with MacENC. These charts are derived from S-57 official, approved by the’IHO. In the example shown below, can cover a Pacific crossing, from Panama to New Caledonia, with a general chart Navionics ENC S-63 to 150 € HT (Ref. 1I09001) and several charts ChartWolrd S-63 to 7,50 € each (Ref. see image below). These charts can be purchased and downloaded directly from Chartworld website. 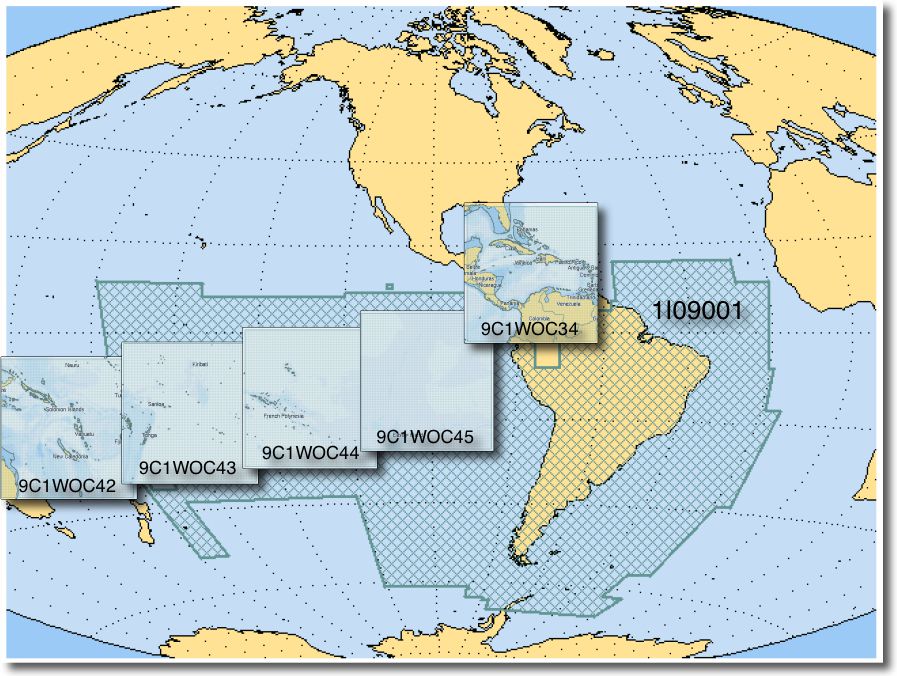 As explained in previous articles, Navionics provides worldwide coverage of vector charts, based on official charts from different hydrographic agencies that reproduces by agreements. The charts are grouped into a number of folios, called "Region" covering the entire globe. They are provided on a number of media according to destination (chartplotters, computers, smartphones). See related articles about it (³).

All Navionics folios are the same, as cover as levels of detail, for all media. But their price depends on the destination media. For example, the Region 46XG is sold for download : 10 € for iPhone 30 € for iPad in the iTunes AppStore, $40 for iNavX (iPhone / iPad) on x-traverse.com website, $299 for MacENC on x-traverse.com. SD Card or Compact Flash media :  238 € at Nauticom. Do not try to understand, there are only logical business strategy in all this.

Anyway, Navionics offers the best global coverage and the best value for money all media, especially for those who want to sail away. For our three favorite applications, iNavX, GPSNavX and MacENC, X-Traverse provides an ideal platform for downloading together with a private storage space providing other services. The updates are performed about once a year, charts can be downloaded repeatedly. The major updates are done by new edition, it must be purchased anew each portfolio.

The choice is yours, according to your project navigation, your area, your application or hardware. Be aware, however, that the raster chart is gradually declining.

Using the category "Cartography" in the sidebar of this blog, You'll find articles tutorials about how to install charts.

—
(¹) Raster charts, Vector charts.
(²) Pricing : MapTech / Memory-Map / ScanNav (statements on their websites in February 2011, excluding shipping costs. HT pour Maptech, VAT for others)
ND = Not available
(³) Navionics knows no crisis
—
Related Articles :
The stakeholders of electronic charting
For all the acronyms of this article, see definitions in Glossary.
—

6 Replies to “The difficult choice of electronic cartography”