I'm not a follower of the comparative tables for applications, and I already said, so it is difficult to measure and compare completely subjective aspects such as ergonomics, the graphic quality of a user interface, the speed of execution of such and such function. However, a recent comment in a previous article I was sufficiently annoyed that this makes me an attempt of comparison of purely objective aspects, namely the offered functions and prices.

Je me limiterai aux trois applications correspondant au « top 3 » de mon récent sondage (¹) that offer, on the one hand the connectivity functions essential to integration with the on-board instrumentation, on the other hand the storage of information (files GRIB weather and currents, tides). All functions allowing navigation in the high seas. This is the reason why I excluded Navionics Boating, Some functions are accessible by Internet streaming (tides, current and weather streaming) which the therefore essentially intended for coastal navigation, offering no connectivity other than for a few sounders for fishing (²).

The comparison will focus on Weather4D 2.0, iNavX and iSailor. 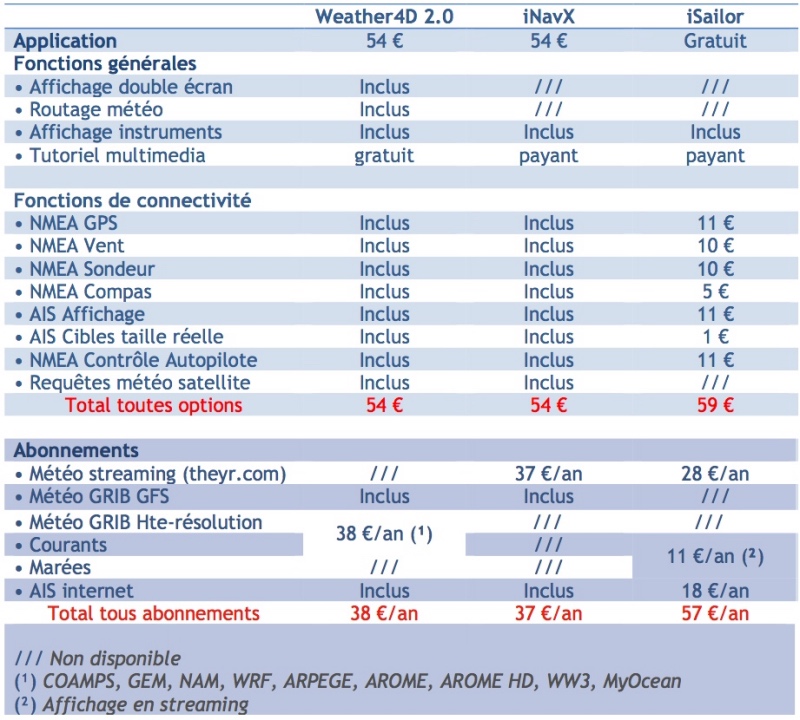 Even on an as objective as the list of functions, There is plenty to discuss. For example, requests GRIB weather files in iNavX are basic, with very simplified choice criteria and a rudimentary display, then Weather4D 2.0 offers extensive selection criteria, and a sophisticated multi-data display. Another example, iSailor offers subscription data for marinas, pompously called Navigation Guide, absent function of the other two applications. But split in a tenth regions priced 9 or 10 € per year and per region, and the low level of quality of the information provided, make rather a subjective than objective. Last example, tide and current provided by subscription in iSailor are very relative precision, based on harmonic tables much less accurate than the tides from the SHOM, proposed with marée.info, or even those provided with AyeTides which have been the subject of a lengthy corrections for several years. To finish, iNavX and iSailor offer the same GRIB weather data from Theyr.com company , but their access streaming requires a robust internet connection to broadband, unusable more than 5 nautical miles far from the coast.

Seen quickly in the table, a free application is not necessarily the cheapest one. Whatever it is, tariffs involved are ridiculously low, compared to the development work necessary for the design and continuous improvement of these excellent applications on which we increasingly rely our security. Find that an application to 50 € is expensive, When you have the hands on a tablet about 700 € and it sits in a boat that is certainly worth between 100 times and 300 times this price, seems a bit indelicate.

Perfectly objective test, charting offered by a navigation application is a determining choice for boater.

iNavX offers, through the server X-Traverse, a choice of chart publishers, essentially charts in raster format. But he has pricipalement the vector mapping Navionics more worldwide coverage, divided in large areas. One year term, chart updates require a renewal fee to half the original purchase price.

iSailor only offers its own vector mapping Transas TX-97, also in global coverage divided into many geographical areas, to purchase in-app. It is worth noting that, from the begining no update has been the subject of a fee.

Weather4D 2.0, just like the Weather4D Android version, offers, via the french server Geogarage, charting from a dozen official publishers in raster format using tiled technology (well-known by MaxSea TimeZero users) for a seamless display. These publishers, whose SHOM, The’UKHO, the NOAA, etc. produce their digital mapping identical to their paper maps. Each annual subscription to an editor allows to benefit from all of the regions it covers. However, to date the coverage is not totally global, certain geographical areas are not, or not enough, covered in detail.

After that choose. And as I could see in the already mentioned survey, nothing prevents you to opt for two different charting in two competing applications. Or choose another application than these three !

4 Replies to “What app for navigation ?”