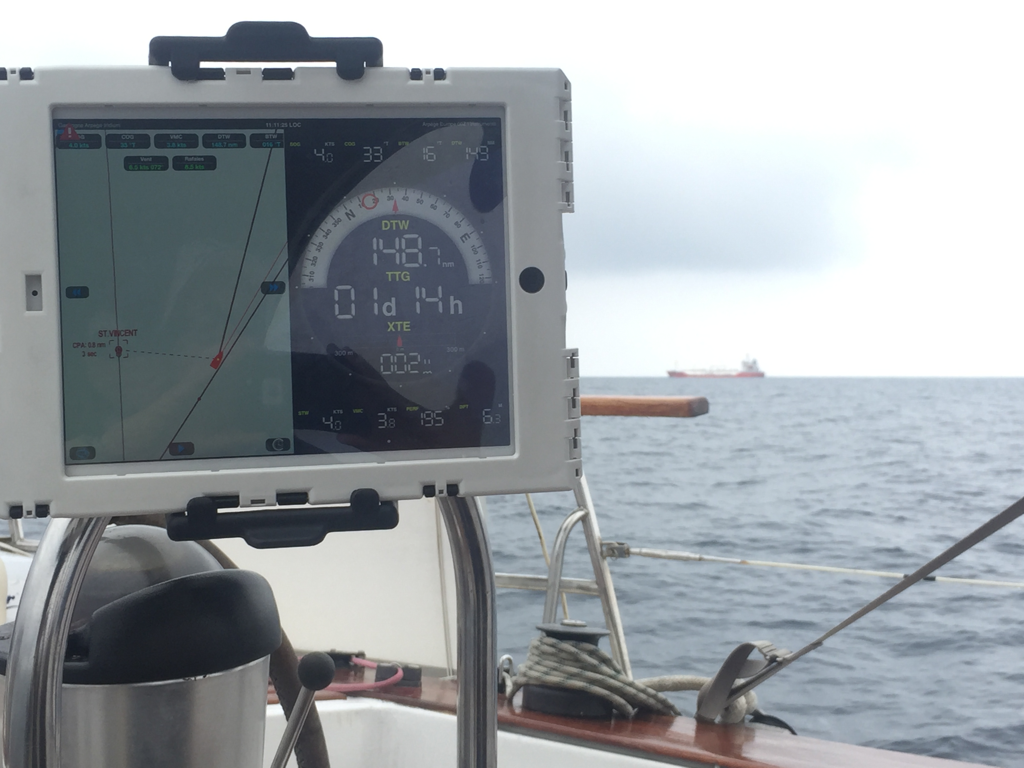 For several years it is possible to integrate iPads and other mobile devices using Wi-Fi to onboard instruments. This enables navigation applications, not only receive all sensor data : log, anemometer, sounder, AIS, etc, but also to send their own navigation data to instruments, as, for example, to control an autopilot.

This integration involves devices called “gateways” or “routers” which connect to the networks of the instruments., receive the data circulating through these networks, and transceive in Wi-Fi to tablets and smartphones. Some navigation applications are being developed to process this data and transform mobile devices into real navigation centers.

Expressed this way, it seems at first relatively simple. In reality, one is quickly confronted with the multiplicity of networks and communication protocols used by marine electronics manufacturers for many years : SeaTalk1, SeaTalkNG, SimNet, TopLine, Micronet, NMEA0183, NMEA2000, and I forget perhaps. What catching serious headaches !

Fortunately, the manufacturers of these gateways have tried to address the multiple situations encountered with the instruments of all brands and above all generations. Indeed many boats are still equipped with instruments dating back several decades associated with newer, and different brands, so with different communication systems.

This is why these Wi-Fi gateways are usually multichannel transceivers calledmultiplexers, can simultaneously process data NMEA0183 (¹) from several instruments, data from a network NMEA2000 (²), and sometimes the data SeaTalk1 from Raymarine older generations instruments. All these data are converted into a single stream exported to the Wi-Fi module, USB output, sometimes other NMEA0183 ports. Data are translated on the fly from a protocol in the (or more) other(s). Further communication can be bi-directional, which enables navigation applications to send on Wi-Fi module their own data, either to control an autopilot, or to power a plotter or repeaters, regardless of their brand and communication protocol. 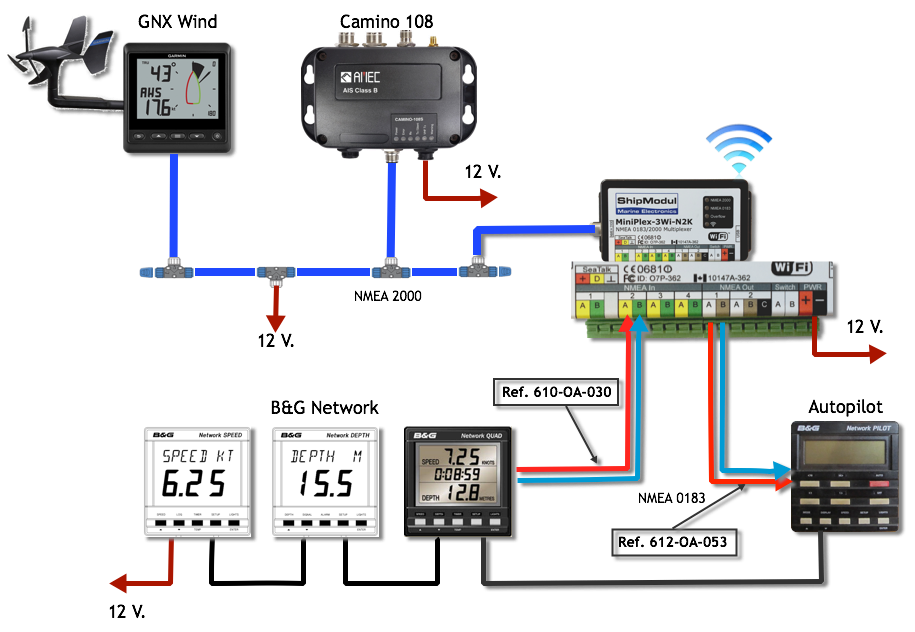 Installation example with a mixed network NMEA0183 and NMEA 2000 and instruments of different brands.

To my knowledge, the first multiplexer worthy of the name was the iMuX by Brookhouse in fall 2010. This device, close enough to the amateur DIY, already allowed to connect multiple instruments NMEA0183 and possibly SeaTalk1. Unfortunately, its lack of reliability and chaotic marketing in France did not make it a great success. Since then several units dedicated to yachting came up, a micro-market sometimes used by small companies whose sustainability is not always assured.

I selected four gateways meet the primary endpoint to support the NMEA protocol 2000. This allows connect all the instruments designed for ten years by the major brands of yachting : Raymarine, B&G, Simrad, Garmin, Furuno, etc. All gateways do not necessarily support the protocols of older instruments, the choice is to be based on the combination of instruments present on your board. A contrario, there is no point to choose a gateway that supports SeaTalk1 protocol if you do not own the ST60 or earlier Raymarine range. 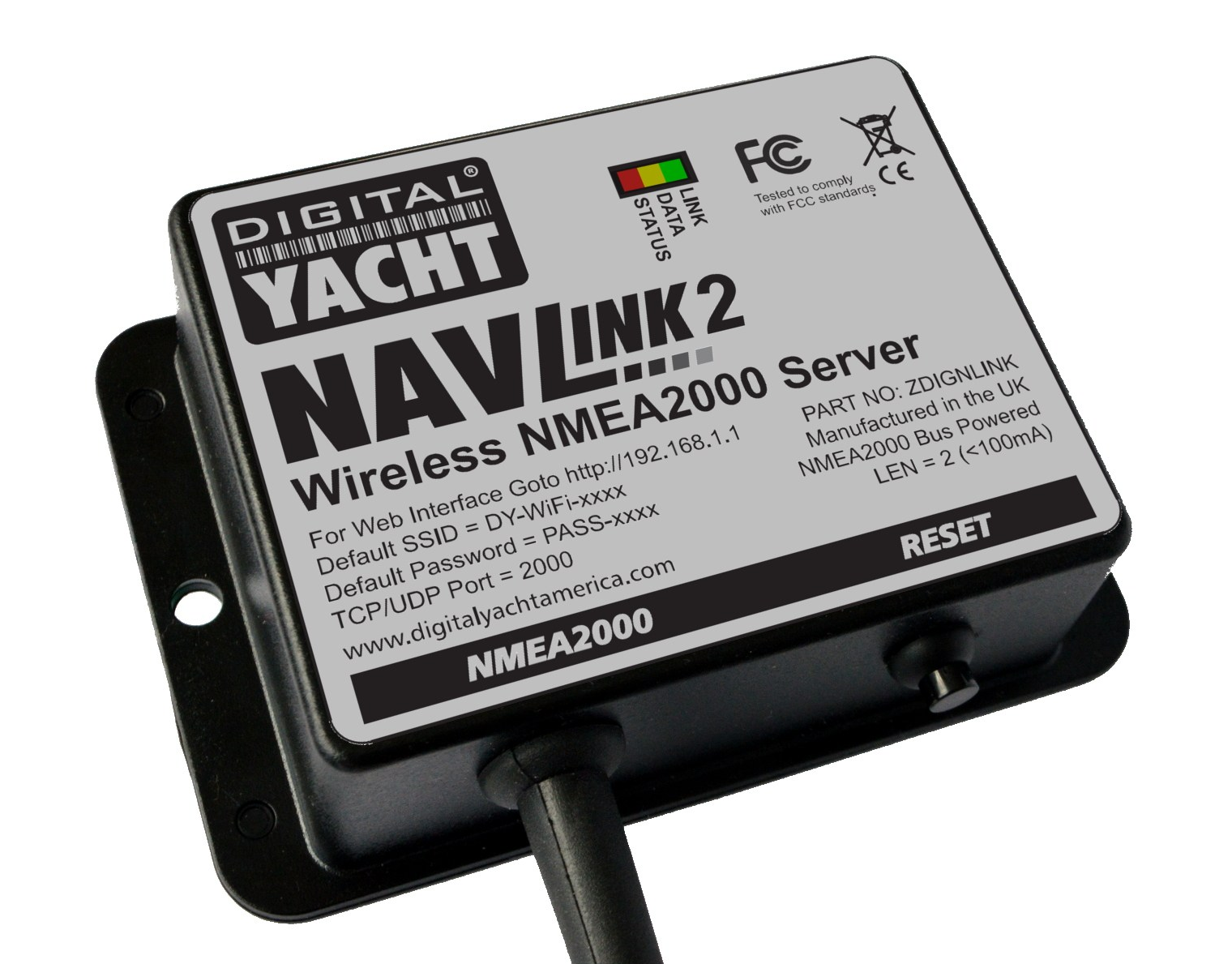 NavLink 2 only supports the NMEA 2000. protocol. It is also the easiest Wi-Fi router to install. It builds its own Wi-Fi hotspot and supports TCP modes (connecting to one mobile device) and UDP (multiple connections). It is configured in "Access Point" mode (default mode) or "Client" of an existing Wi-Fi network. It can connect up to 7 Wi-Fi devices. It translates on the fly incoming NMEA 2000 data to NMEA0183 data output via Wi-Fi, and vice versa for received data from mobile applications.

The configuration is reduced to its simplest form : it contains a built-in web page accessed with any browser, for changing the network mode, to change the Wi-Fi password of the device, Wi-Fi channel, and select the UDP or TCP. One can open a window for viewing the NMEA0183 data in transit. Finally, the interface to the internal firmware update. 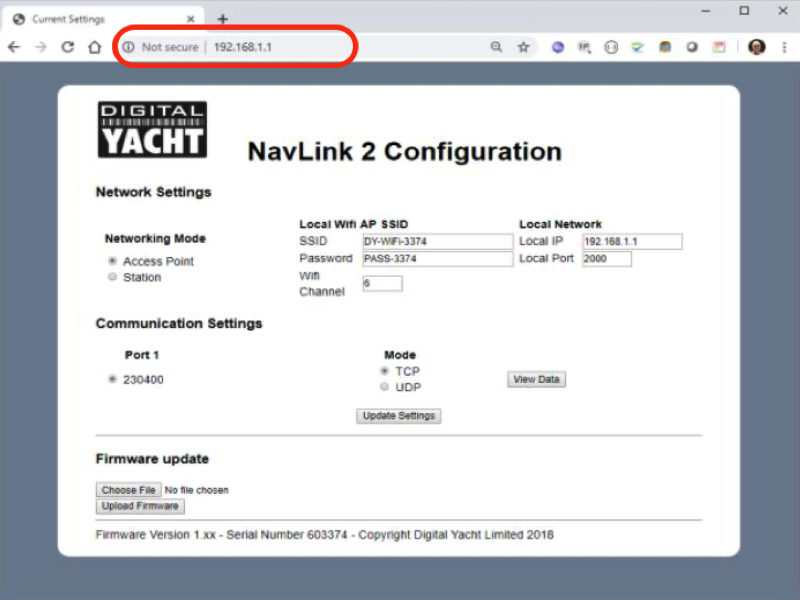 NavLink 2 is only water resistant, IP54 standards (³) and must therefore be installed dry. It is the ideal device for basic facilities, but respond only simple needs, preferably an NMEA 2000 of the same brand, and mobile applications only returning standard NMEA0183 data.

Like the previous router, W2K-1 only supports the NMEA 2000. However, it translates data NMEA 2000 in NMEA0183 bi-directionally and simultaneously on 3 different servers (3 ports) configurable, all broadcast via Wi-Fi. It supports TCP and UDP modes which can be assigned indifferently to each server. W2K-1 creates its own Wi-Fi hotspot, but can also be integrated as a client of an existing wireless network. Transmit the data up to 150 Mbps at a radio frequency 2,4 GHz. This is perfectly suited to the very high speed of the NMEA 2000 protocol. It is equipped with an SD Card of 8 GB to record the data stream for subsequent analysis, with 4 to 100 days depending on the number of connected instruments and thus the volume of processed data. The configuration and firmware updates are performed by an internal web interface accessible with any browser. The Wi-Fi access point supports up to 4 concurrent connections (4 mobile devices). 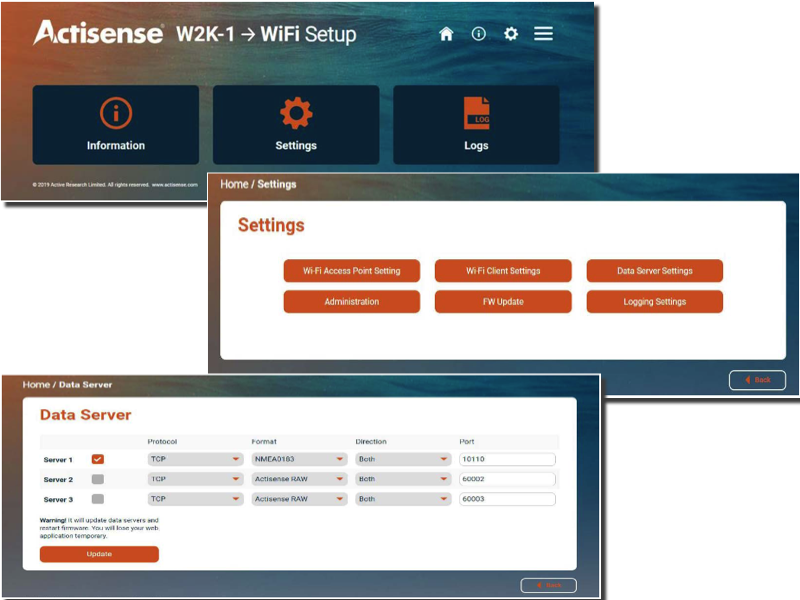 Cherry on the cake : it is a full waterproof unit, IP67 standard (³). A gateway particularly suited to wet environments on racing boats and offshore racing, equipped generally with very recent instruments. 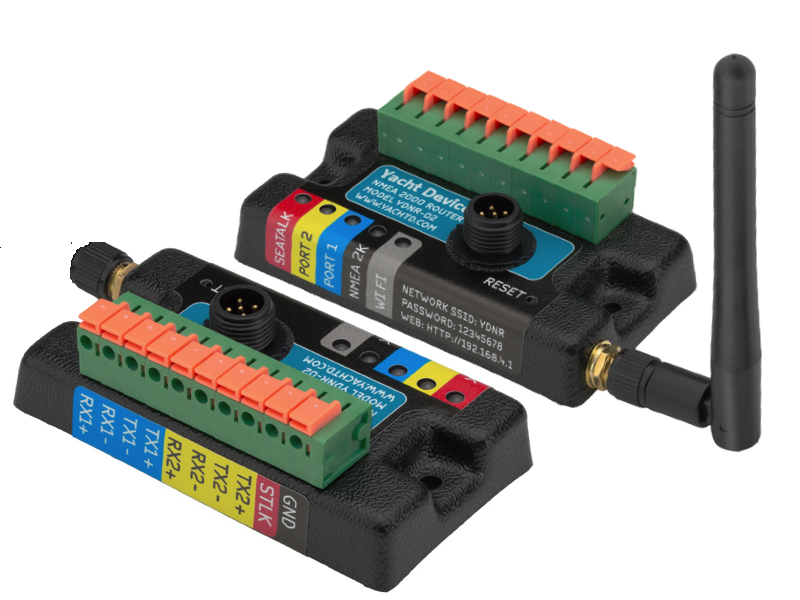 This Wi-Fi router is a multiplexer that supports NMEA 2000, NMEA0183 et SeaTalk1. It creates its own Wi-Fi hotspot and can also be integrated in client mode to a Wi-Fi existing network. It converts bi-directional data between the three supported protocols. In "Access Point" mode, it authorizes up to 3 simultaneous connections with 3 parallel servers. Each port (server) allows 3 connections in TCP mode or unlimited in UDP mode. It has a powerful filter system output data, which allows to adapt to mobile applications capabilities.

YDNR-02N incorporates an extended web server allowing, a complete configuration 2 input / output ports NMEA0183, du port SeaTalk, and data filters. In addition, measuring gauges web page to manage the digital switch module and visualize in real time the ship's data using a web browser on a computer, a laptop, a tablet or a smartphone. The Ultimate, if you access to your boat Wi-Fi network via Internet, web gauges can be an effective solution to monitor and manage your boat. 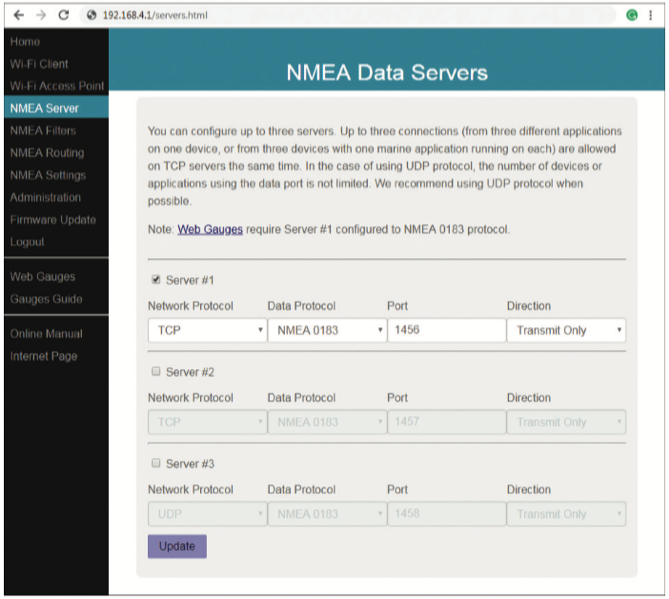 The free CAN Log Viewer, available on the manufacturer's website (Windows, Linux and MacOS) is used to display messages and NMEA 2000 and J1939 in real-time, configure NMEA 2000 instruments and to update the firmware of the device.

This more technical router than the two previous will also be more complex to set up, but in return it will adapt to heterogeneous instrument configurations. A defect : the housing is sealed, but not the connectors ramp.. 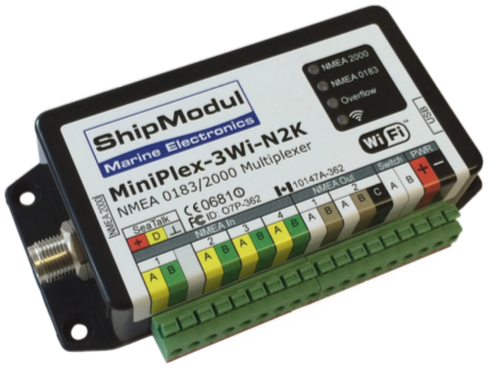 This multiplexer represents the "Swiss army knife" of Wi-Fi gateways.  Came up in 2016, the ShipModul company has since made several firmware enhancements to make the router to do everything, or almost. It provides a connector NMEA 2000, 4 input ports NMEA0183 including one converts SeaTalk1 , 2 NMEA0183 output ports, a USB connector and the Wi-Fi module. Like the previous ones, it creates its own Wi-Fi access point and can be configured in "client" mode of an existing Wi-Fi network. It works in TCP or UDP and accepts 5 concurrent connections (4 UDP + 1 TCP). It simultaneously translated three bi-directional protocols using buffers (buffers) to regulate streams. In addition, All NMEA0183 ports are adjustable rate, with 4800 to 57600 input, and up to 115200 baud output. It has very powerful filters for controlling output data, and avoid overflow (buffers overcapacity).

Unlike previous routers, configuration is only done using a utility available for download on the manufacturer's site (Windows and MacOS). A web interface is also present in the device, but it is only for the administration of the internal characteristics of the device and network communication modes. 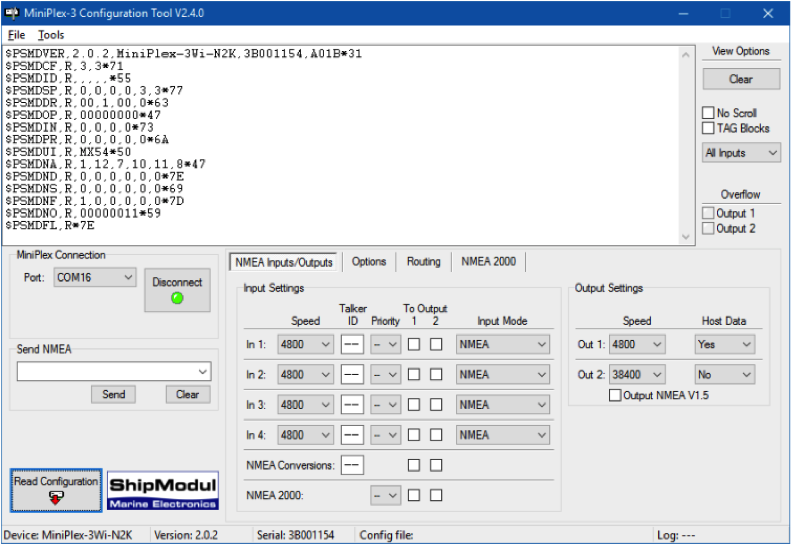 The case is made of ABS fireproof, but not waterproof. It is therefore necessary to install it in a dry and sheltered place. Today is in France the most usually installed device, especially on used sailing boats, because it can manage all scenarios and allows a very thin configuration data flow.

These four devices are obviously not exhaustive, but they represent a sample of which is more reliable today, tested with a majority of applications by manufacturers. 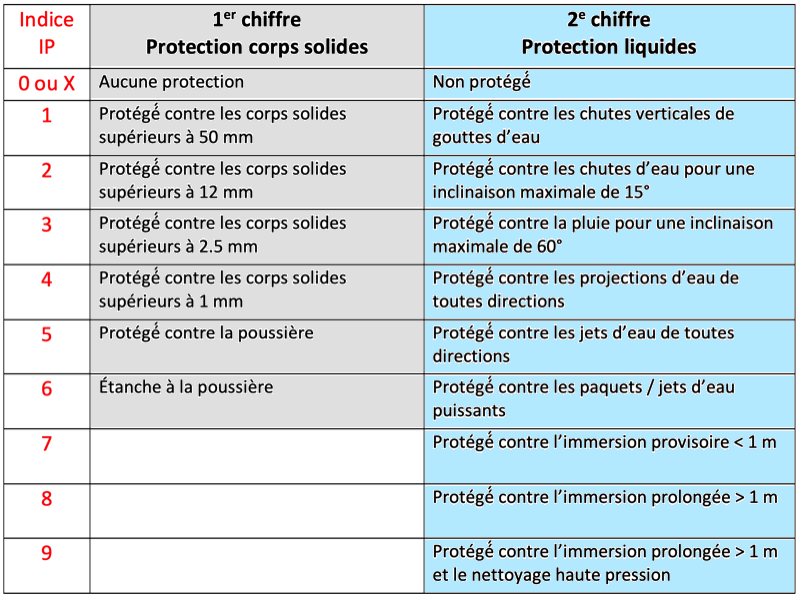