The arrival of Macs with Apple M1 processors and macOS systems 11 "Big Sur" and macOS 12 "Monterey" has caused disappointments among users of GPS connected via USB and/or Bluetooth for their navigation applications.

In USB, despite the latest driver available Prolific V.2.1.0, we had to wait for the last update macOS 12.2 to make the GPS BU-353/S4 of GlobalSat operational. The same goes for the GNS3000 (¹) in Bluetooth that was experiencing a recognized instability of the interface for connecting multiple devices, instability that unfortunately does not yet seem to be fully fixed. END_OF_DOCUMENT_TOKEN_TO_BE_REPLACED

The new GNS 3000 announced by Global Navigation Systems since last spring is finally available (¹). It replaces the GNS 2000 More. Now equipped with a Bluetooth transmitter 5.0, it has an SD Card slot for recording position data continuously.

Compatible with Apple products, It caters mainly to non-GPS devices : iPod Touch and iPad WiFi all models. It can also be used with all PDAs, Bluetooth phones and tablets. It has a Li-Ion battery offering an autonomy of 10 continuous hours.

END_OF_DOCUMENT_TOKEN_TO_BE_REPLACED 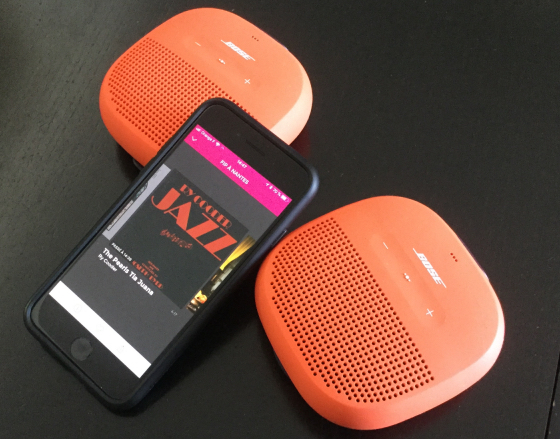 If you navigate with an iPad and enjoy mobile navigation, and if you like listening to music for dancing on the waves, you may be interested in Mobile Hi-Fi.

The well-known manufacturer Bose designed small Bluetooth speaker, the SoundLink MicroBT, compact and fully waterproof, perfectly suited for mobile use, and therefore the boat. I tested and adopted.

END_OF_DOCUMENT_TOKEN_TO_BE_REPLACED

Ultrasonic anemometers-weathervanes for yachting came up just over 15 years. Among the best known include those of the US Airmar and French LCJ Sensors. Featuring sophisticated electronics, these sensors without moving mechanical parts have the advantage of being more robust than conventional sensors, and provide more accurate data. They can also integrate other sensors as barometer, gyroscope, electronic compasses and even GPS.

The first ultrasonic sensors were fitted with a cable for power and data transfer. The manufacturer LCJ Sensors, building on the success of its CV3F sensor marketed since 2001, designed the range CV7SF, wireless models whose data is transmitted over a radio frequency to a receiver which converts them into NMEA (0183 or 2000). Power is supplied by solar cells on the sensor cap, and different output connection interfaces are proposed according to the models.

A new player, Spanish Calypso Instruments, just design a wireless sensor of a new concept, the Calypso Ultrasonic Portable, whose characteristic is to be featured with a Bluetooth Low Energy Transmission Protocol (Bluetooth 4.1), which offers many advantages.

END_OF_DOCUMENT_TOKEN_TO_BE_REPLACED

SailRacer UAB is a small Lithuanian company founded in 2013 by a team of experienced developers and regatta passionate . They design solutions for the sailors and clubs, both software and devices, focusing on developing applications and essential accessories to the processing of navigation data for mobile devices and their operation through the Cloud. They provide an application specifically dedicated to the regatta, Sail Racer, and the first Bluetooth NMEA gateway in the market, DataLinker.

The DataLinker allows to receive data from the instruments on a smartphone, a tablet or other compatible mobile device, thanks to the Bluetooth Smart technology (¹). You can use wind data, Compass, log, sounder and GPS with any dedicated application connected to the internet in Wi - Fi and so share this data via the Cloud.