The year 2015 barely begun, developers already deliver us their applications developments, probably developed between two glasses of champagne during the holidays. I consider iNavX and iSailor as the two best navigation apps so far under iOS. These are the ones that offer the most extensive functions and the choice of the best maps. They each have their qualities and their faults, and I took advantage of the innovations introduced by their recent update to attempt a quick comparative price/functions.

Warning, this exercise is associated with a snapshot vision, valid today but quickly obsolete tomorrow, as changes are rapid in this domain. On the other hand it is always difficult to share the objective and subjective aspects in a comparative, I was already confronted in the past (¹).

This version, delivered for a few days, essentially adds some improvements to the many functions already present.

Associated with weather display option provided as optional with Theyr.com (²), a tap anywhere on the chart when the forecasts are displayed provides access to data meteogram for this location. The choice of units is made in the application preferences. 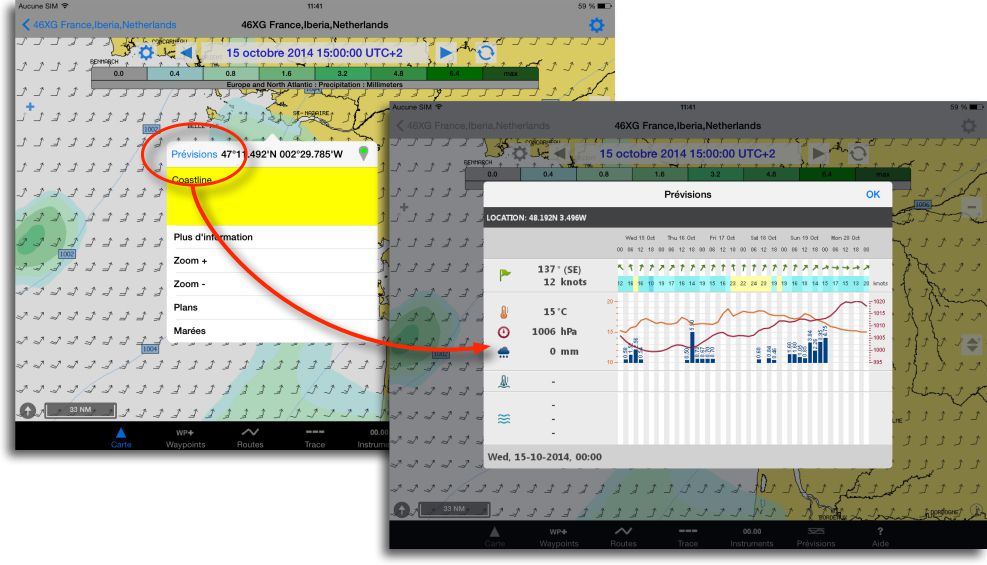 In addition to transfers to the X-Traverse account that allows to save these data, iNavX allows exporting using the "Open in" function, via AirDrop, and also to iCloud Drive (If activated in the settings of the device).

With the iPhone 6 and 6+ appeared a built-in atmospheric pressure sensor. iNavX displays the barometric 'BPR' pressure in instruments banner, with a graphic zoom recording the pressure of the last 24 hours. 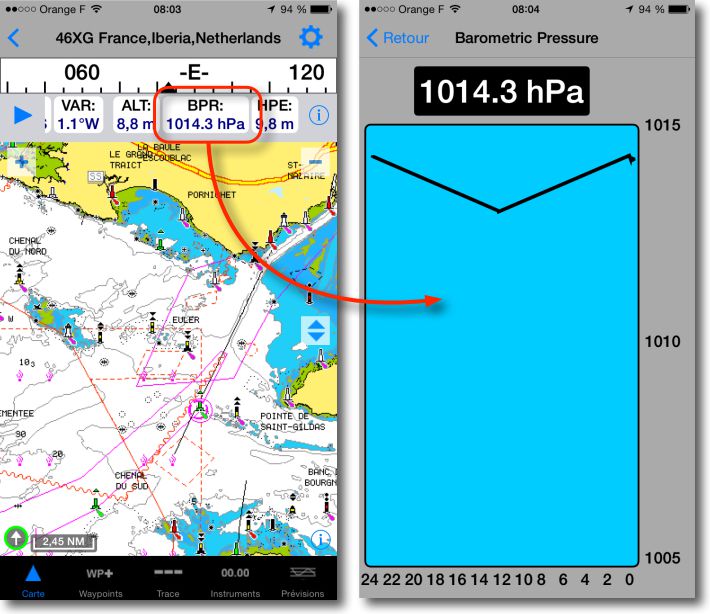 This version provides new options by subscriptions and improvement claimed for a long time : the ability to enable and disable the display of lights sectors on the chart.

The tides in iSailor is calculated on the basis of four main harmonic and corrections in shallow water. The calculation process is based on the Simplified Harmonic Method of Tide Predictions which can be found in various publications, as the Admiralty Tide Tables (The British Admiralty tide tables). It is clarified that the results of this method can introduce "minor differences" with the official tide tables. It's an option per yearly subscription. 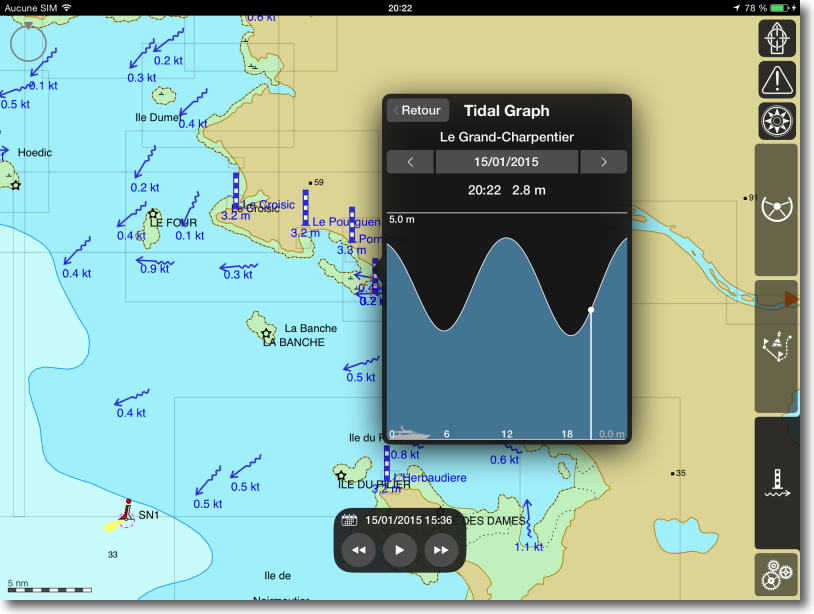 They contain all the marinas, commercial and fishing harbours, and the moorings of a geographical area, includes detailed information as the means of contact (VHF, phone, email, web site), facilities, access, etc. Navigation guides are accessible via a new tab of the lateral drawer. The first two available areas are the Mediterranean and the Caribbean. Sites are represented on the chart by specific icons, a tap for accessing information in the lateral drawer. Each guide is an option per yearly subscription. 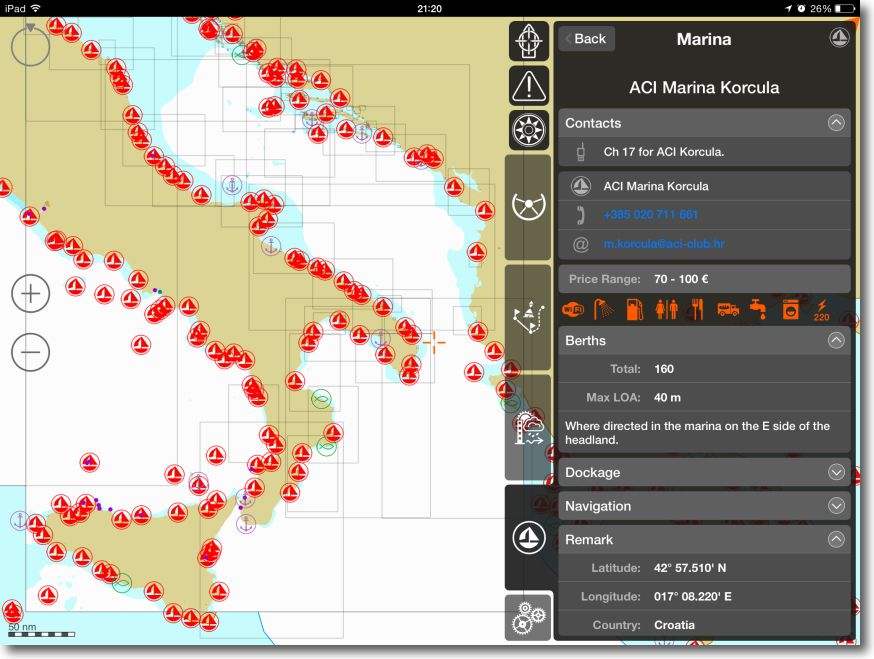 Both applications offer the same basic functions. In addition to the management of waypoints, routes and tracks files, We find the alarms and alerts enough complete (waypoint enabled, anchor, AIS, WiFi connection, aso.) but with a significantly different treatment. Functions’import/export are much more numerous in iNavX, as well as chart display settings that provide a much wider range of options.

The Chart management (purchase, download, update) is much easy with iSailor, since the purchases are integrated (in-app). In contrast to iNavX where purchases via the X-Traverse server are a real headache for users.

About advanced functions, NMEA interface, support AIS, data rate Weather, the prize goes to iNavX that showed from the beginning a desire for integration with all navigation instruments, using NMEA0183 and NMEA2000 support and TCP/IP protocol. A request and display feature of GRIB weather files via X-Traverse , or via Saildocs Server with Mail or satellite messaging (Iridium, XGate). iNavX does not directly provide the tides calculation, but to interface with the application AyeTides offering the heights of water from 10.000 stations in the world. iSailor offers connections NMEA0183, but limited to navigation instruments : GPS, Wind, Sounder, AIS. However the option Tides & Current displays vectors of currents on the chart with direction and instant speed in real time. Remains to check the accuracy.

Both applications converge on the management and the display of the AIS targets, with CPA/TCPA calculation, ROT, approach alarms. Receipt of AIS can be done via NMEA in direct connection to the instruments (receiver or transceiver) or by Internet reception.

Finally a fundamental difference concerns charting, which I will discuss below : iNavX proposes the use of a major charting catalogue from different publishers, vector charts with Navionics, Raster with others. iSailor offers only TX-97 vector charts from its publisher Transas.

Concerning the two user interfaces, i.e. ergonomics, I'd rather not say. The appreciation of one or the other is too personal. Let's rather talk about the price, much more objective comparison. 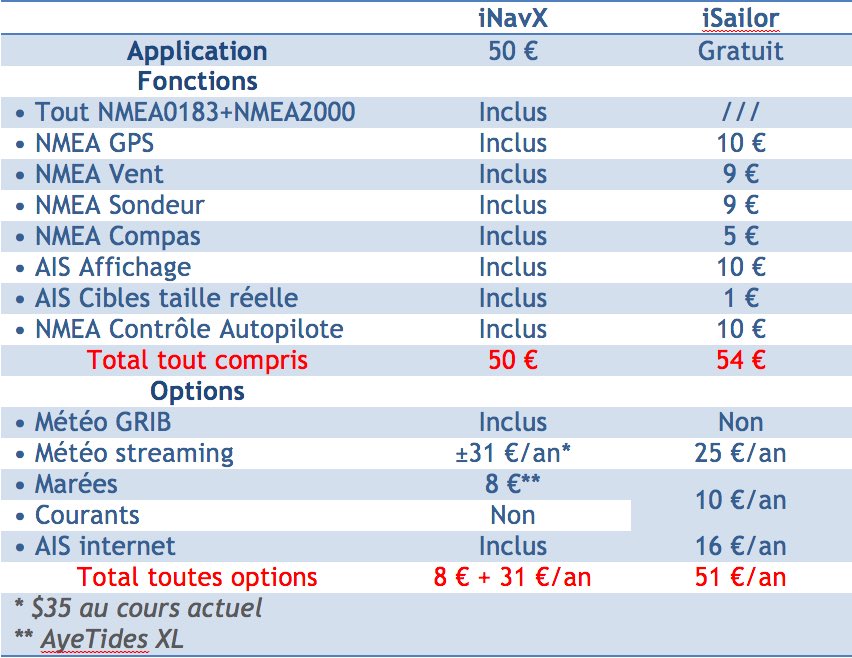 For the comparison to be consistent, I will only compare vector maps Navionics (iNavX) and Transas TX-97 (iSailor).

Regions area are much more fragmented with Transas than with Navionics. For a comparison to be valid, must be considered equivalent geographical areas. Not easy. In addition, large areas of Navionics penalize mariners attending only limited coastal areas, while the addition of reduced areas with Transas penalize those who cross vast areas. Take two examples concerning the Western Europe and the Western Mediterranean.

To obtain the equivalent of the region Europe Navionics 46XG ($80 ± 69 €) should be added 175 € Transas charts ! But all boaters navigate not the Belgium to the Azores and the Canary Islands to Corsica. Knowing that each European charting area is sold 25 €, for the price of a Navionics 46XG I can buy almost three Transas charts region, for example South England + Channel + Atlantic up to Vigo. What will largely suffice to many boaters.

To obtain the equivalent of the region Mediterranean Navionics 43XG ($80 ± 69 €), should be added 150 € Transas charts region, not exceeding the Turkey coasts. Yet once everyone will not sail in Greece, but even must pay 75 € to cover the French coast, Balearic Islands, Corsica and Sardinia, preferred destinations by our compatriots.

Regardless of the quality of these charts, on which I already adequately expressed myself (³), It can be seen that prices, despite a misleading division, are virtually equivalent to geographical areas of an area normally frequented by a majority of boaters. Navionics will be more affordable for those who sail the high seas, and Transas for small coastal shipping. But overall it stands.

At last, important precision : the Navionics charts must be renewed every year, in order to continue to update, at the initial purchase price. It is therefore neither more nor less than to a subscription (in which no one is obliged to subscribe). So far, Transas charts are updated for free since the beginning, what would not last forever.