in May 1992, the International Hydrographic Organization (IHO) had adopted a standard aimed at defining the specifications of electronic charts, the ENC, used by ships, as well as the devices that display them, called ECDIS. This standard was published under the name S-57 – IHO Special Publication N°57. This standard was then the subject of a major update, version 3.1, in November 2000. Ten years were then left to the various operators, manufacturers and publishers, to bring their navigation systems on board ships into compliance. In January 2010, a new standard S-100 IHO Special Publication – Universal Hydrographic Data Model has been published, an important development aimed at adapting to this rapid growth in data available for navigation.

Indeed, as electronic navigation becomes more widespread, mariners have maritime data flows from multiple sources that allow them to navigate with ever more safety and efficiency. However, with the increase in the amount of information and the number of sources, it becomes essential to standardize data so that they can be easily integrated and displayed appropriately on navigation systems. After several years of evolution, The’IHO published in December 2018version 4.0.0 of the S-100 standard (¹). In 2019, several specifications (²) of the S-100 standard have been updated and published.

The specifications of the S-100 standard

The S-100 standard is the IHO framework for the standardization of marine data products such as high resolution bathymetry, surface currents, marine protected areas and new standards for electronic navigation ENC charts. Basically, the S-100 framework of standards uses catalogs readable by ECDIS devices which will lead to systems plug and play and allow easier updating of data standards. The development of the S-100 infrastructure is governed by the IHO S-100 Working Group and is currently chaired by the NOAA.

NOAA departments are actively involved in the development of the S-100 standard and related product specifications and strive to align new products and services with the S-100 series of standards being developed.. This will allow sailors to have more information integrated into their navigation systems, which will help them plan optimal routes and make crucial decisions at sea. For example, the administration is working to make the next edition operational 1.0.0 with S-111-Surface currents extracting data from NOAA operational forecasting systems and converting them into a format that can be imported and displayed by navigation systems. In addition, the National Weather Service Ocean Forecasting Center (NWS) works through the World Meteorological Organization (WMO) to produce S-412 ocean forecasts, which also use the S-100 frame. Other products, including S-102 – High resolution bathymetry, S-112 – Predictions of water levels, and S-129 Under Keel Clearance management systems (UKC), are also in various states of development that will facilitate precision navigation in commercial harbours around the world.

Between January and October 2019, the IHO published the specifications (³) products for S-102 edition 2.0.0 – High resolution bathymetry, and the list of the following specifications included in the version 4.0.0 :

The inevitable extinction of the paper map produced as a specific document results in the refocusing of SHOM's activity on the electronic card and products of the S-100 family. In this context, the generalization of print-on-demand contracts will be encouraged by making it available to resellers who so wish, digital map data in raster format. Otherwise, SHOM's digital reference data will continue to be provided in their usual formats (vector or raster according to customers), to companies in the nautical industry who are already integrating them into their own digital offers for boaters.

Although this topic does not immediately apply to boating, it should be interested. Several manufacturers of navigation instruments are in the professional marine market as well as the pleasure craft market, and with the generalization of vector charts, there is no doubt that our instruments and applications will eventually have to meet these standards. ENC charts under S-57 standard, although not widely used in yachting, have been used by several compatible applications on our computers and mobile devices for several years now. 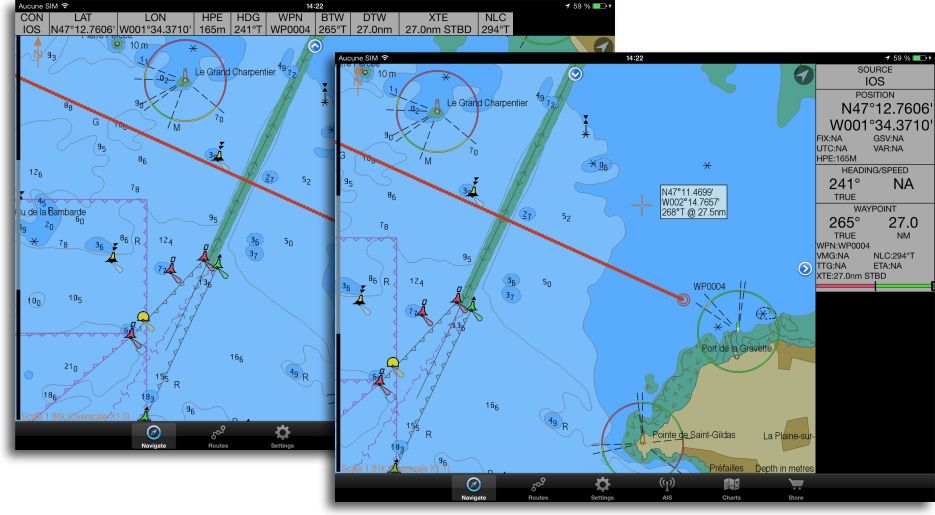