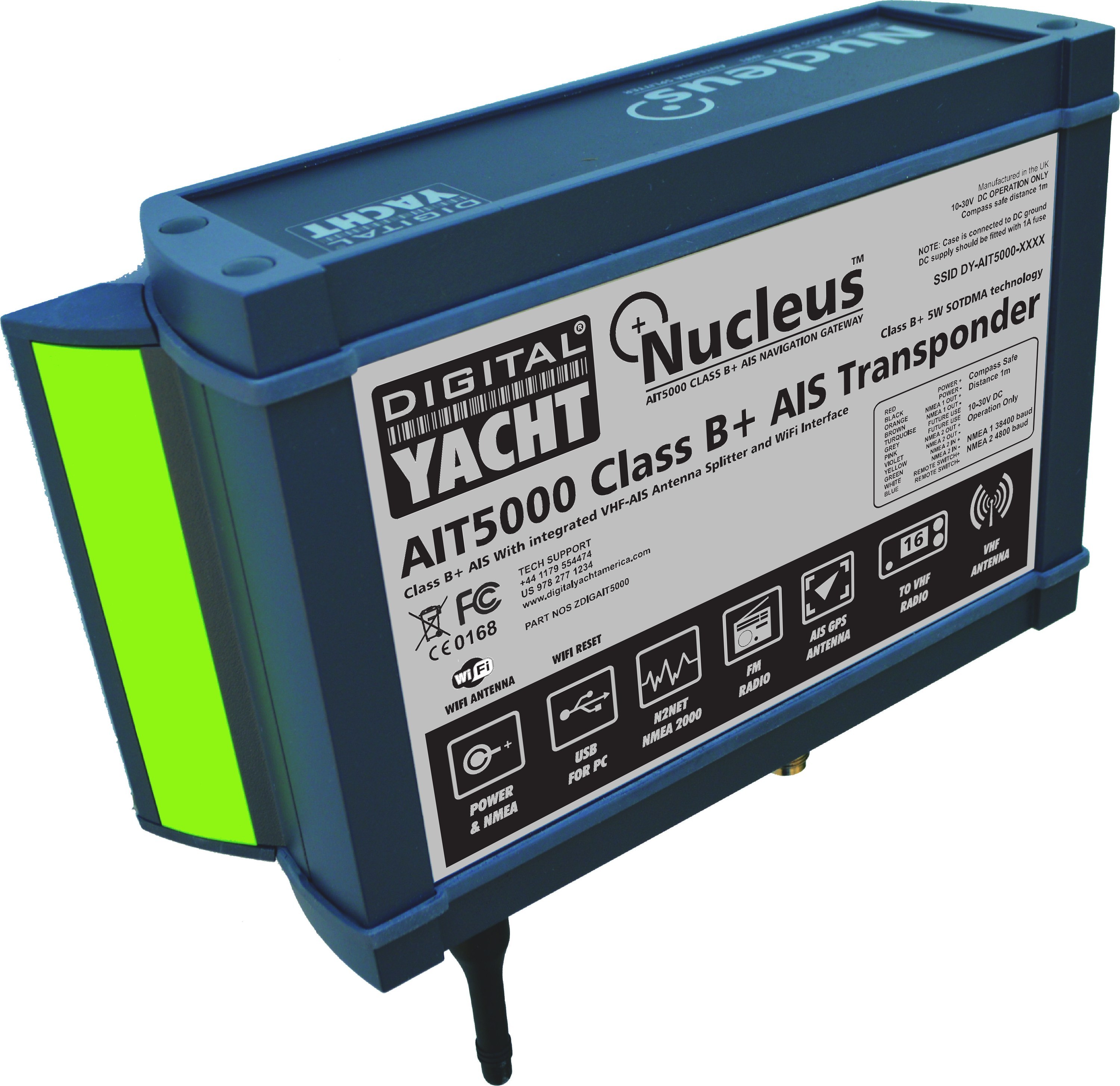 The new AIS transponder AIT5000 (from Digital Yacht) increasing the transmission rate depending on the speed of the ship.

The automatic identification systems (AIS) may have been originally designed as an anti-collision system for commercial navigation, but in recent years, they have also become a popular security assistance for pleasure boats.

AIS allows not only to see and be seen, even hidden by the darkness, fog, earth or distance, but it also becomes a useful navigation tool now that the transmitters are installed on tags, buoys and other navigational aids.

The AIS-SART (Search And Rescue Transponders) were also approved for use as a man overboard devices, which can be captured by SAR helicopters and by surface vessels equipped with an AIS system.

Until recently, however, AIS was using a system at two distinct levels :

To explain the changes, one must first understand how the AIS. An AIS transponder includes a GPS receiver and a VHF data transmitter. The transponder transmits this GPS position in digital form on two VHF channels dedicated to the AIS (161,975 MHz 162,025 MHz). To avoid the simultaneous transmission of multiple devices, AIS transponder using a system called TDMA (Time Division Multiple Access), meaning : multiple access time division.

Each transponder communicates with other users of the area to avoid conflict and claim his own short time interval 26,6 milliseconds. The system allows up 4500 ships to sail in the same neighborhood, automatically giving priority to those who are closest and therefore more likely to be a collision.

The number of transmissions by a transponder will vary depending on several parameters, including class (A or B), vessel speed, the state of the navigation, and the fact that it is trying to maneuver or not. The class A transponder of a fast ferry may show its location every two seconds, while a pleasure boat equipped with class B only transmits all 30 seconds.

A Class A transponder also transmits with a power 12,5 Watts while a Class B transponder emits only 2 Watts – or just over a third of the power of a portable VHF 5 Watts. This limits the transmission class B at a maximum range of 8 to 10 nautical miles means that traditional Class B transmissions are often not received by AIS satellites that provide global tracking of ships. 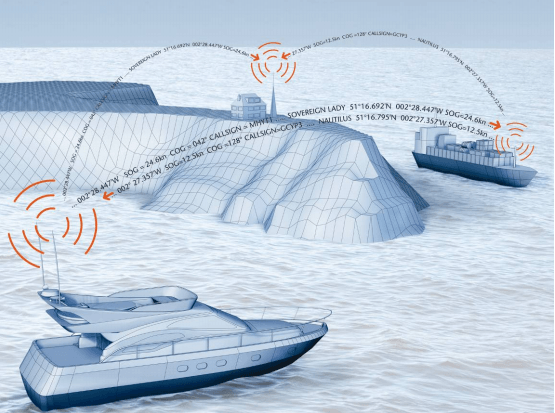 The new Class B +, also known as Class B SOTDMA, or Class B 5 Watts, bridges the gap between the Class A transponders and Class B, offering clear advantages for certain types of vessels and applications. Class B + uses the same SOTDMA technology as class A and therefore has the same priority when it comes to reserving a time slot, ensuring that it will always be able to pass, even in congested waters overloaded with AIS. It also increases the transmission rate depending on the speed (but is not affected by other maneuvers), giving other ships a clearer view and present the position. 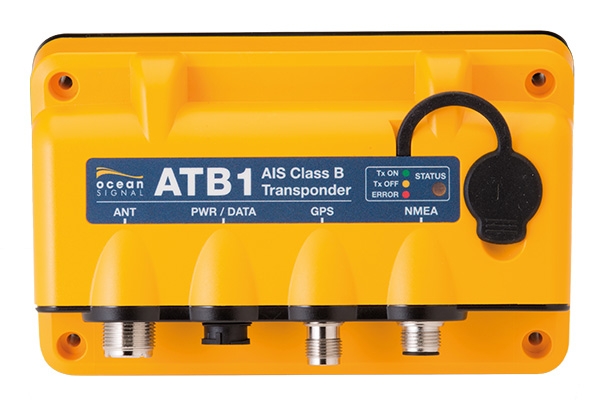 Ocean Signal also introduced a class B AIS Transponder + that allows recreational users to access the type of Class A service that was previously reserved for commercial shipping.

For motor boats to travel, as for yachts, more frequent updates of the position does not make a big difference, but a star hovering 25 nodes advance of nearly 400 meters in 30 seconds it takes for a Class B transponder to transmit its next signal. On a boat equipped with a transponder class B + navigating to 25 knots or more, the update rate is 5 seconds, so that he will travel 65 meters between two updates.

At last, class of transponders B + have a higher power transmission 5 Watts instead of 2 Watts, This not only increases the other boats reception range (assuming that the height and the antenna performance is good), but also significantly improves the ability of satellite AIS receivers to track your location.

The answer depends on the type of boat you, the type of cruise you do and the budget you are willing to spend. The cheapest solution is to use a simple AIS receiver. This is enough to display the AIS traffic in your neighborhood and allows you to communicate with ships using their MMSI number, but that does not make your boat visible to other AIS users.

Class A transponders are located at the opposite end of the scale, are expensive, energy intensive, and are therefore reserved for large yachts and sailing vessels. For smaller boats, a Class B transponder type "black box" costs less than 1000 euros and can be associated with a multifunction display or tablet app.

However, the scope and limited frequency transmissions could be a disadvantage, especially for the fastest boats, or more distant cruises where the highest transmit power will significantly improve the capacity of satellite AIS to track your location when out of range of surface VHF. In these circumstances, spend 200 to 300 Additional euros for a Class B transponder + may seem wise. But attention to the fact that the power of 5 Watts requires more energy resources. 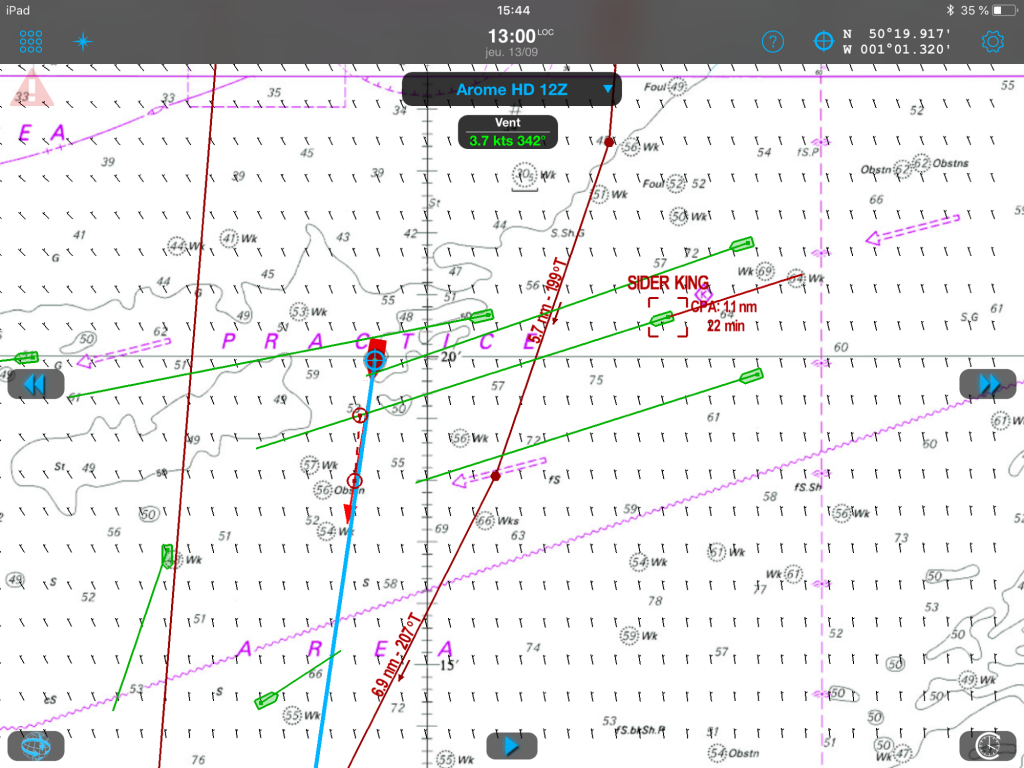 At night or in fog, it can be very difficult to see what is happening around you, especially when a ship is hidden behind a headland or a larger vessel. Weather4D R&N

There is a myth of believing that big ships have the ability to "turn off" Class B transmissions in crowded areas. There is no filter option on business or leisure AIS receivers. Thus, if a merchant ship captures a Class B transmission, it will trigger the collision risk alarm as for a class A transmission. One can only filter on a large ship ECDIS screen to reduce visual clutter by removing Class B targets, but absolutely not their transmission itself.

On the other hand, it is recommended to small vessels intersecting a high traffic commercial area to their class transponder B mode "silence" in order not to unnecessarily burden the ship displays very little maneuvering tonnage must be able to focus on the class of target A.

No transponder should be considered as a replacement or alternative to radar because this instrument does not view the land, the grains, nor other obstacles without boats and AIS transmitter.

–––
(¹) transponder AIS : for "AIS transceiver". Notice to purists of the French language : the English term "transponder" has been commonly Frenchized by the profession (manufacturers and retailers of boating) but has not been adopted to date by lexicographers.
–––
Related Articles :
– AIS for Dummies
– AIS, the second maritime revolution after the GPS
–––

13 Replies to “The new AIS class B + transponders explained”