So many of you are still wondering about choosing an iPad for navigation use. Unfortunately having no time to respond to every request a post is required. Each year it is advisable to review this question, and sometimes more often.

With the delivery of iPad Air 5 in March 2022, the chipset Apple Silicon M1 appears on a mid-range model in a housing similar to the previous version, with moreover 8 GB, the double, of RAM memory. The last iPad 9 "low cost" delivered in last september, on the other hand, has almost the same dimensions as iPad Air 3 and iPad 8, with the only difference of switching to A13 Bionic and M13 graphic. These two latest models can still be protected in waterproof cases aiShell 10″5 and 11″.

Criteria to choose an iPad

There are several, which does not only depend on marine use, but also the home use of your tablet.

Initial iPad1, historical tablets some of which have traveled thousands of miles for several years, are no longer supported by Apple, just like iPad 2 to 4 and iPad Air. This means no more possible updates to iOS and the eventual obsolescence of applications that developers cannot keep backwards-compatible indefinitely. The majority of applications today only work on iOS/iPadOS 10 and next.

iPad Air 2 in October 2014 provided an improvement to the quality of the display with a ’Multi-laminated screen technology thinner and antireflection treatment. We can finally read it (nearly) in broad daylight. With 2 GB RAM, a "racing machine" for its time, lighter and thinner than Pro models. It was my favorite tablet, and my own for six years.

The first iPad Mini in october 2012 had the same characteristics as the iPad 2. It was a great tablet, with a screen that has nothing to envy to its big sister, autonomy for long days of navigation and fast power charging. Replaced by the successive versions Retina display, an iPad Mini 6 was released last September with an 8.2″ equippedA15 Bionic processor.

March 2016, the arrival of an iPad Pro 9.7″ with a still more powerful processor and a memory up to 256 GB, but more expensive than iPad Air 2, do not then represented a decisive advantage for navigation use. The following years, Apple has expanded the size of the iPad Pro screen to 10,5″ then recently 11″. But these high-priced devices have been accompanied each year by several iPad 9,7” "low-cost", to attract tight budget. In 2019 the arrival of the new iPad Air 3 10,5″ at a very attractive price despite its A12 Bionic processor and 3 GB RAM, positions it between the iPad 9.7″ 2018 and iPad Pro 11″. It replaced my own iPad Air 2 in 2020.

How easily one gets lost, in a nutshell, Apple now offers three lines of iPad :

In November 2015 has launched the large iPad Pro with a 13″, optionally provided with a keyboard, supposed to come competing Microsoft Surface devices in the professional market. For pleasure, its size and weight make it ideal for the chart table, Despite the availability of a waterproof case for 2 first generations (³) and supports allowing to use it outside. since November 2015, The Pro 13″ has been the subject of four new versions The last is provided with the processor Apple M1, with 16 GB of RAM and up to 2 TB storage. 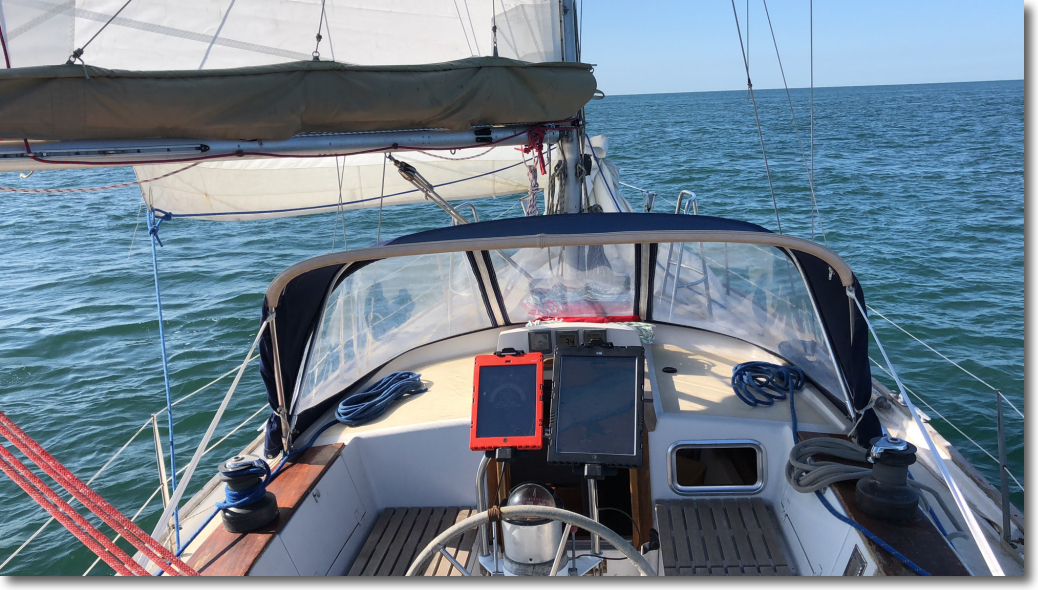 Warning : the last system iPadOS 15.x is only compatible with iPad Air 2 and newer. Older iPad, iPad Air 1 and earlier, will not change. Reminder, once the devices cross the fateful seven-year mark, they are considered obsolete by Apple.

Meet you when the next models come up.

–––
(²) Apple devices
(³) iPad , GPS and subscription to the cellular network This post dating from 2011 is unfortunately still relevant !
(³) A new aiShell protection is expected in spring 2022 for the most recent models 13″.
–––