I voluntarily under this article as a query. Many users, all countries included, wish visualization common in applications Richard Ray. Indeed, there is no display function of the currents in GPSNavX, MacENC and iNavX. It is a deliberate choice by the developer because there are many data sources and all hydrographic services are unwilling to provide their files in digital format. In addition, users are likely to take their data displayed on maps as sure and certain, with consequences that could engage the responsibility of the editor and legal risks, especially in the USA, too great for the developer.

The position of opponents

In October 2007, in a discussion on the forum macsailing.net forum, August Hahn (Editor Mr Tides and AyeTides) had provided the following arguments :

"NOAA specifically warns against interpolation of currents between stations (¹) :

Unless there is a flow model available that describes mathematically how the currents vary over time, it's impossible to take isolated stations and create a chart that accurately reflects the currents. The programs listed [in this thread] must use very simple models, or the areas they cover are simple enough (not changing that dynamically over time) hat they can form predictions based upon limited data.
For example, up here in the San Juan Islands, currents are incredibly complex. The Canadian Fisheries service produced a book with about 90 separate images of what the currents do, based upon the tide height at a station and how long ago the high tide occurred. The images show currents that reverse flow in a short space, flows that spiral, and flows that change velocity dramatically over one hour. Modeling something like this requires hours of computer time, not something that we simple users can do.
Take a look at the example below and you will understand that current vectors are something neither Richard Ray nor I want to approach.. " 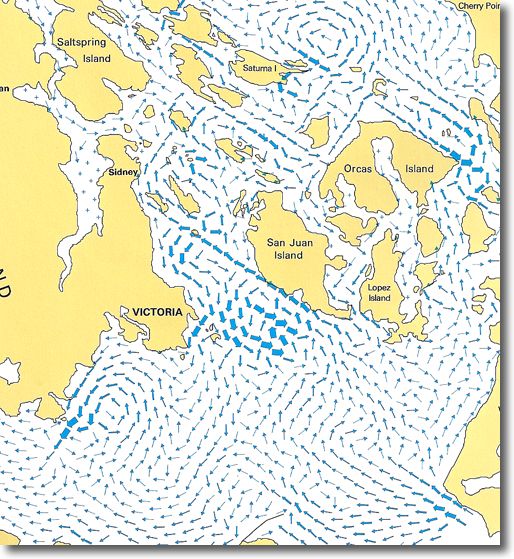 To which Richard Ray, Publisher of GPSNavX / MacENC / iNavX, had add :

The problem in US is they do not have digital current files for each station, with hourly data vector. Developers should therefore make themselves these files, by linear extrapolation of currents between each station, what they refuse with a lot of sense.

Major applications offer currents files overlayed on charts. MaxSea in example, integrated current files available for some areas of the world in its Mapmedia charting (²), without concern for conditions of use, other than to write warnings releasing their responsibility. These data are very general, users have to make prudent use, because weather changes can significantly alter the characteristics of currents. 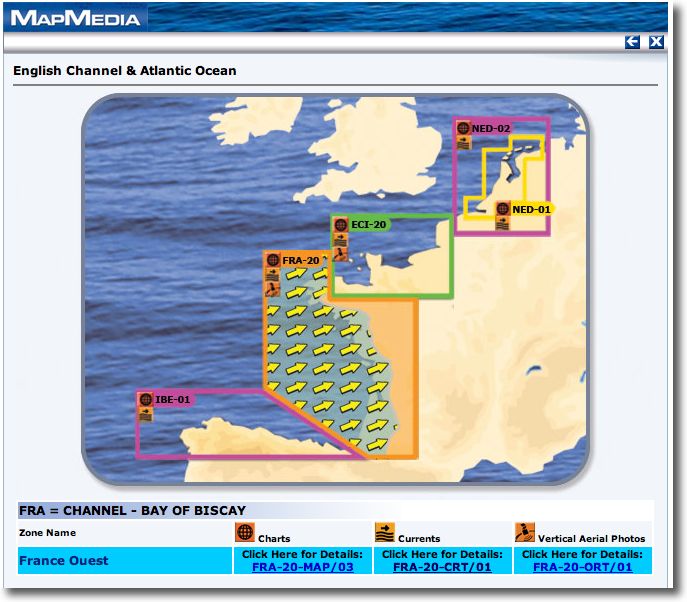 Some of software editors, and also ocean racing actors, furnish to the Australian company Tidetech, GRIB files offering of tidal currents and ocean currents for many regions of the world, from their own models of tides, and from data available from different oceanographic services (NOC and NCOF UK, OCHS Spain, DFMHA Germany, aso.(³)). Of course these files are paid, for individuals, oversubscription (about 35 € a month subscription) or are the subject of trade talks for professional publishers. 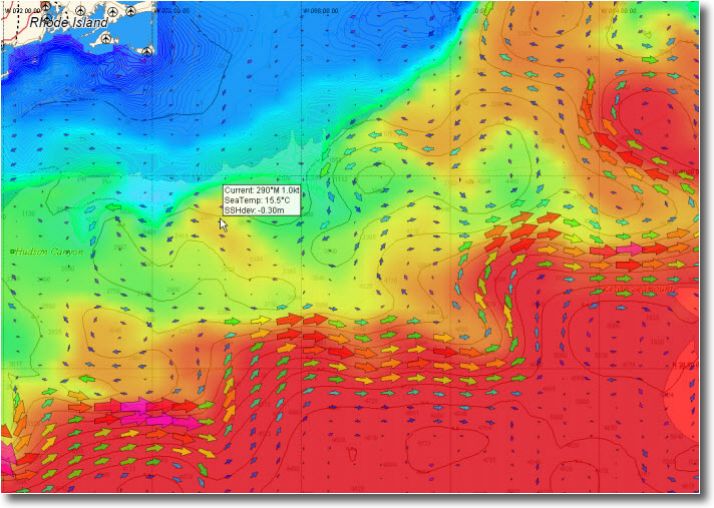 Unfortunately, the coasts of France are absent from their areas. And for good reason.

The SHOM published to date current data records in paper atlases for many areas covering the coast of France. Well known to mariners for a while, these atlases have been the last two decades a complete overhaul by full digital data integration. From 1995, Indeed, SHOM has undertaken to create a bathymetric database (BDBS) aimed at bringing together in digital form all the bathymetric data available to it. Numerical modeling of currents has benefited greatly from this progress has now achieved the desired resolution in areas where tortured grounds generate highly variable currents. 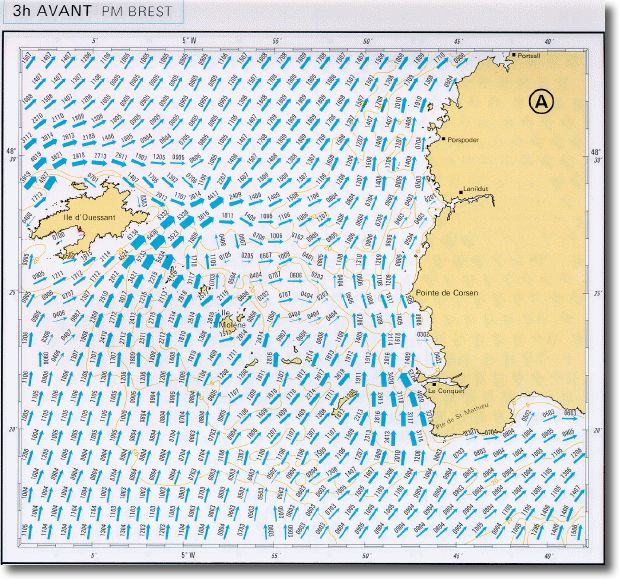 SHOM also publishes these data in the form of a digital product : Tidal currents of the Coasts of France (Channel – Atlantic) just for professional information systems. Publishers can then use these files to integrate into their navigation applications, and market respecting the distribution contract of this public administration.

With this, company ScanNav, French publisher's eponymous software for Windows, offers a Tide option, extending its application, including : 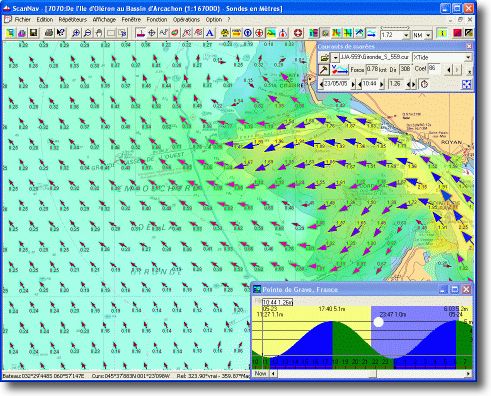 Other French publishers, whose Eole Informatique with its software Noé, propose SHOM currents files, as an option, with their navigation software.

Provide current GRIB files, from official hydrographic services, does not seem riskier than providing GRIB weather forecast. In both cases it is for the mariner to use wisely the information available, and to overlap with the observation.

Stranding caused by an incorrect calculation of tide can reach both (I write knowingly) an adventurous rendered output by poor weather forecast. The information is not simply concerned, but their overlap and their interpretation are the responsibility and competence of the skipper.

Thus, I agree with those calling currents files with their electronic charting, and at least that software be made compatible with the available files, particularly GRIB format files, lightweight and easy to overlay on charts. Unfortunately in France, the Hydrographic and Oceanographic Service of the Navy is not prepared to allow software vendors to deliver their currents files in GRIB format, still less to make available to mariners. This is all the more regrettable that the evolution of yachting to the electronic charting is mostly completed, and tidal streams data are essential to safe navigation.

—
(¹) Remember that the U.S. are equipped with current predictions stations giving speed and direction of currents as the tide stations give the times and heights of water in one place.
(²) See article The stakeholders of electronic charting.
(³)
NOC – National Oceanography Centre
NCOF- National Centre for Ocean Forecasting
DFMHA – German Federal Maritime and Hydrographic Agency
OCHS – Establishment of a Spanish system for Operational Oceanographic
(⁴) The same source that Mr. Tides and AyeTides by August Hahn. It should be noted that ScanNav recently obtained data SHOM tidal predictions in digital form and permission to include in its application.