Competition is fierce, and if China respects the schedule, BeiDou-3 constellation will be completed before GALILEO is complete. A point on the situation at early 2017 : 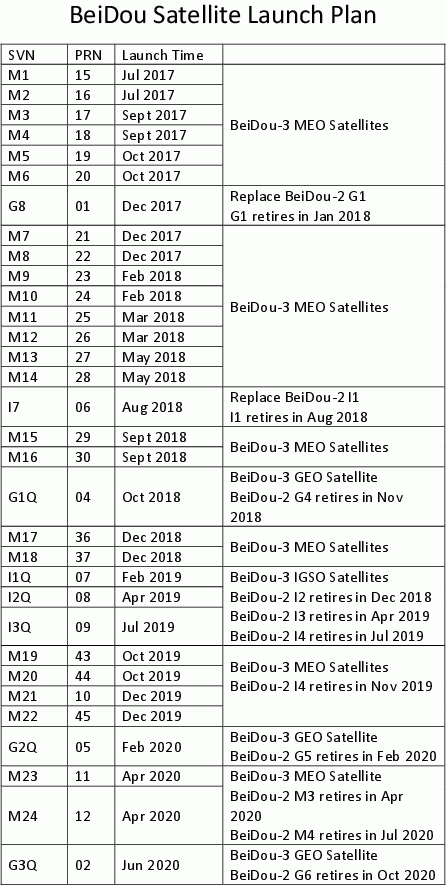 The Chinese Government has published an impressive launch schedule : orbiting of 32 BeiDou-3 satellite, whose 9 in medium orbit (MEO) in 2017, retire of 11 BeiDou-2 satellites, adding 14 operational satellites remained. All completed mid-2020.

The peculiarity of the Chinese system is that it is made of 5 geostationary satellites (GEO), 3 inclined geosynchronous satellites and 24 satellites in medium orbits (MEO) spread over three plans, and 3 satellites (MEO) as spare.

The 3 February 2016 the U. S. Air Force has sent the 12th and last Block IIF of the 2nd generation satellite GPS-II. Currently 31 satellites are operational in medium orbit (MEO).

The generation GPS-III, which the first eight satellites are in production at Lockheed-Martin, expected to be launched in 2017. Two other satellites have been ordered for a launch expected in 2022. The complete replacement of the GPS - II constellation won't be completed, with 32 satellites, before 2030, unless an acceleration of financing and production.

In October 2017, the Russia will celebrate the 35th anniversary of the launch of its first satellite GNSS. The system, originally to use 30 satellites, has today 24 satellite distributed on 3 plans. The 3rd generation GLONASS-M satellites is being deployed (Despite the loss of 3 satellites at the failed launch of the 2 July 2013), and a 4th generation GLONASS-K is in preparation, scheduled to be launched from 2018. The Russia would consider to complete in the future this new constellation by geostationary satellites (GEO) and in high orbits (HEO).

With 18 first satellites launched so far, 11 are operational, 2 in tests, the 4 last launched commissioning, and 1 unavailable. Remember that it must be at least 18 operational satellite for a global coverage .

China and the United States benefit from financing capacity which leaves them at the top of this competition, ahead of Russia and Europe whose financial resources are more limited. The services market associated with the GNSS is estimated at such astronomical amounts that each of the major players hope to take the majority by a better offer, and more quickly available, than that of its competitors.

No matter what happens, with up to 130 location satellites turning a furious over our mastheads, if we can still get lost !…