With the multiple charts disappearances during the successive updates of iNavX, I received a number of requests for assistance in the recovery of the said charts.

Regardless of the fact that I am not the NavX Studios LLC bracket (iNavX) (¹), a focus is needed on the method of charts provision by distributors for our mobile applications.

The mapping official publishers offer to distributors of their digital products annual global licenses for maintaining updated maps. This means that distributors pay each year a global license to all these publishers. Hence a necessary requirement to renew subscriptions by the end user.

Navionics about in-app purchases for iNavX for example, there is no chart deletion at the end of a year. As I already wrote, be aware though that maintaining expired charts on mobile is only a tolerance, absolutely no guarantee of recovering after a deletion due to a hardware problem, software, or a device change. The subscription is expected to be renewed each year to qualify for updates. 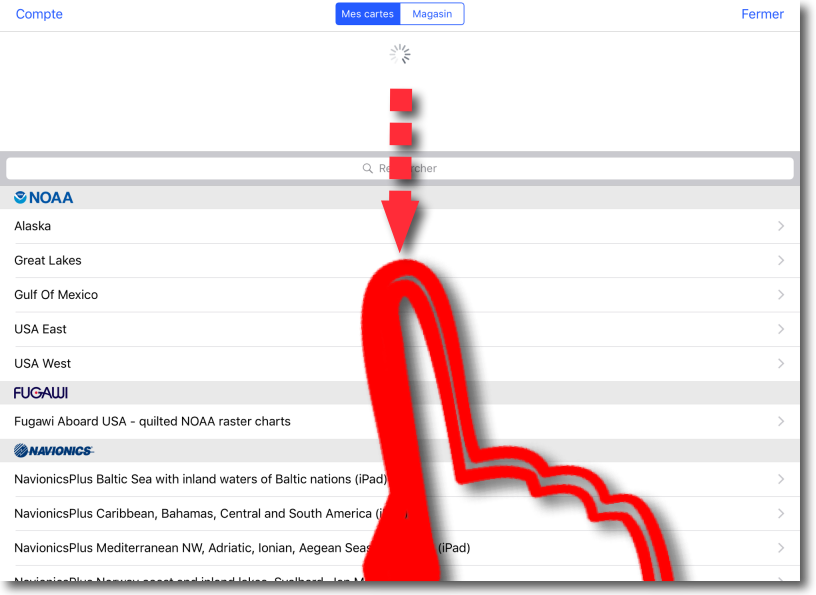 Refreshing folders dragging down the finger on screen

With Geogarage, in Weather4D Routing & Navigation, the principle of subscription is announced on the web page dedicated. The difference with other applications is that one subscribes, in that way, to a publisher for all regions it covers, and not to a geographic bounded region.

Cards served by Geogarage cannot be kept after expiration of the subscription. The licenses to which Geogarage must subscribe with the official hydrographic services must be renewed annually.. The license agreements stipulate the obligation to renew subscriptions for end users in order to ensure that updates are always maintained.

The charts are dated and encrypted, they will be deleted at the end of one year from date to date. However, subscribed publishers renewal will be by tacit agreement, after repeated announcements by email, unless explicit refusal of the subscriber before deadline. This ensures that, in absence of the subscriber response, the charts never be deleted during a crossing. Come ashore, if the user finds an undesired publisher renewal, it will be refunded on simple request to Geogarage.

iSailor was for many years a special case. Transas being designer iSailor editor its own mapping vector TX-97. Since the release of this application in may 2011 (²), Transas had never pay the regular updates of card files purchased in the application. But since the acquisition of Transas by Wärtsilä (³), an annual subscription is now required to maintain updates.

To finish, It is clear that the pricing of annual subscriptions and renewals is ridiculous for mobile devices, for all applications. It is to compare with the same charts for plotters (MFDs) and applications on PC/Mac. Let us not measure the considerable number of maps provided by SHOM subscription 60 € (± 850 charts + 540 cartridges), UKHO 70 € (± 1000 charts + 800 cartridges) compared the sale price of a single paper chart : ± 30 € (SHOM),  28 € (UKHO).

One Reply to “Digital nautical charts : purchase or subscription [Update] ?”