A recent Thread on the Hisse Et Oh forum, I salute by the way, I challenged the accuracy of the chart data provided on the electronic charts. The issue concerns the fact that, in some location, existing information on the Navionics Marine HD application, or on some chartplotters, are missing on Navionics charts available on the website x-traverse.com used with iNavX (and MacENC). Quote :

"Then the question is : Is there a difference between the carto 46XG and the carto Europe or is the difference due to the app that turns the cards. "

Damned ! It seemed useful to make comparisons closing electronic charts from various sources. As far as I know particularly well geographic location used in example, since it is approaching the harbor of Concarneau, near the beacon tower Le Cochon, passage I borrowed hundreds of times over the years I was working with Glenans Nautical Centre.

On port in the channel (entrance) and outside thereof to about 300 meters, are Lué Vras rocks (or Vraz depending charts). It goes without saying that the boats had nothing to do there. But it is a fact that the heights of these drying rocks does not appear on some electronic charts.

Heights of Lué Vras rocks are missing on Navionics / x-traverse 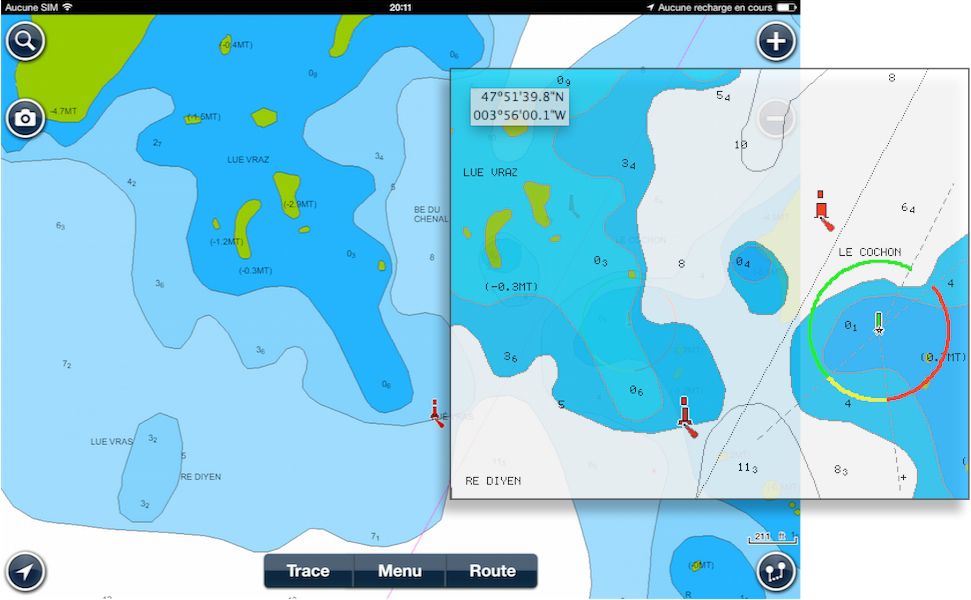 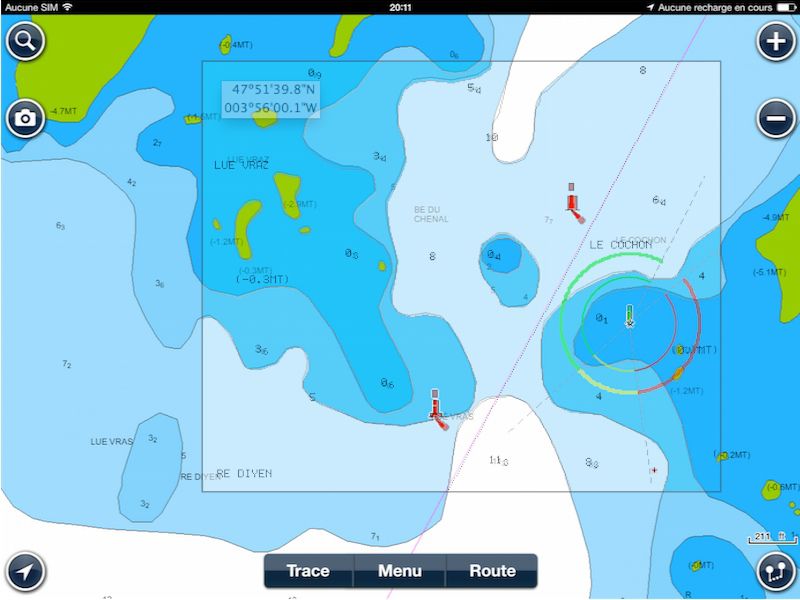 Perfect overlay, but the depth contours are better identified with Navionics / x-traverse

Here we compare the vector charting with raster one. However, must logically find the same location at equivalent scale. In the case below, MapMedia chart is strictly reproduction of the raster chart from SHOM.

Heights of Lué Vras are existing on MapMedia chart 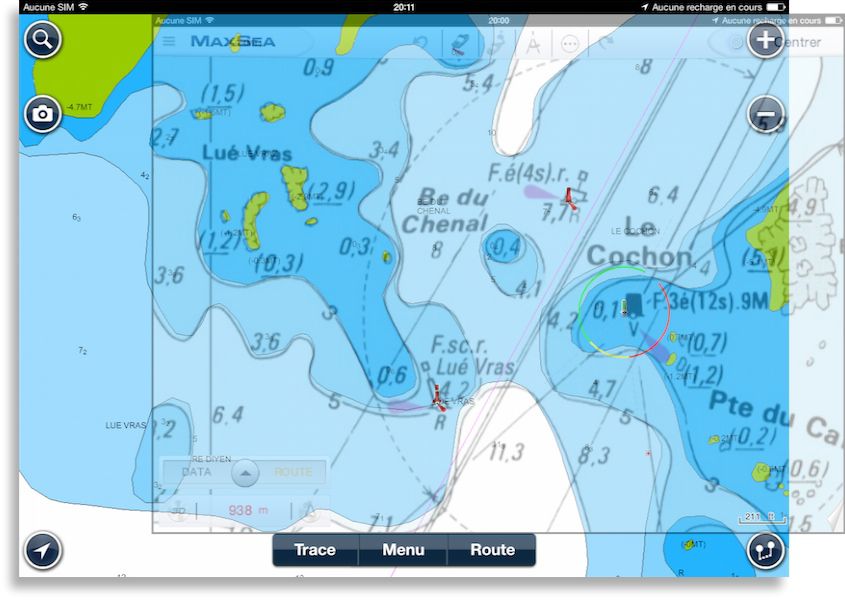 Actually, the overlay of the two charts is almost perfect, aligning markup location as a reference. However there is a slight shift to the right, 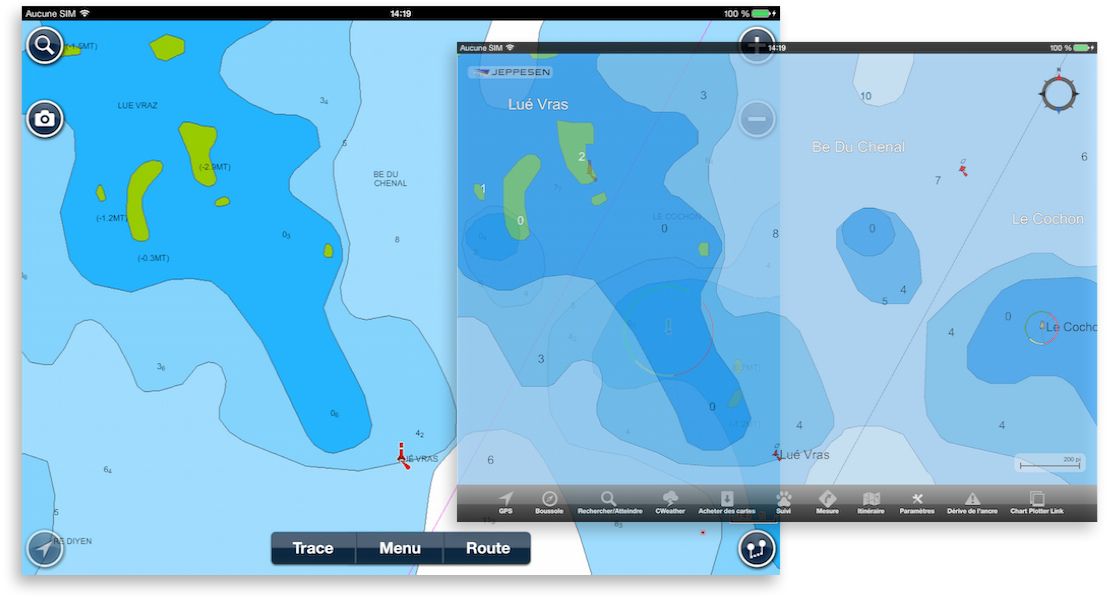 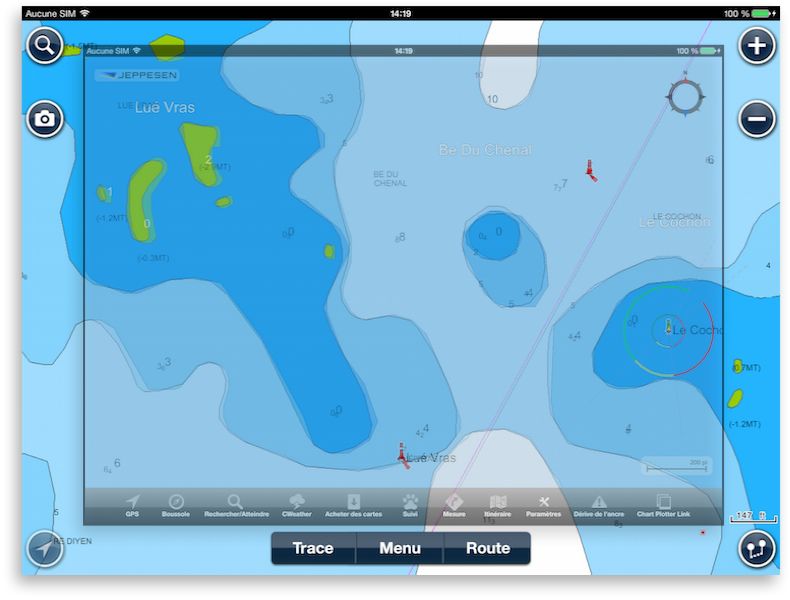 Once aligned beacons, there is a slight shift of Lué Vras rocks eastward. Overall, except depths, charting is faithful.

What can we conclude ?

Which is reassuring, is that the charts topography, namely the geographical elements positioning, is observed in all editors. Reproduction of official charts correctly georeferenced. Which is damaging, on the other hand, is the lack of accuracy in the reproduction of information. Red Card to CMap, Yellow Card to Navionics cartography delivered via X-Traverse. Concerning MaxSea MapMedia chart, it uses SHOM chart duplication and therefore has no merit.

About the above issue on the forum HEO, the answer has been provided to our friend Jean Debèze (¹) by X-Traverse support :

However, should minimize such a gap. The area concerned is far outside of navigation channels, and if knowing the elevation of these rocks can be useful to evaluate a glance the level of the tide passing Le Cochon, it does not create a hazard to navigation. Therefore let's be moderate in our comments about. Navionics is by far the most accurate charing and better updated around the World (²), and inaccuracies encountered by boaters can be reported, with screenshots and pictures to support, until dedicated service by Navionics.

I want to say to the readers that I have no particular interest in extolling the virtues of this charting, it is only the finding made in personal navigation, or reported by reliable sources, in many areas of the Globe.

6 Replies to “Cartographies, the game of 7 errors”