Christmas is coming and, the party is religious or pagan, so traditional gifts.

You've no doubt guessed my passion for marine charting, but before electronic charts, I hold a special attachment to paper charts. I started sailing with SHOM charts in black and white, accompanied by beautiful calligraphy carvings representing prominent headlands, alignments. Then appeared the colored charts, flat, difficult to store in a sailboat 8 meters. I bought charts from the British Admiralty, more colorful, formats that can not, with folds and intricate carvings in the form of cartridges. Finally I discovered the West Indies charts Imray charts, a smaller format, plastic and folded into envelopes plastic protective, a revolution on chart tables. Then SHOM also produces folded charts, "P" for Plaisance, I've sold for several years.

But this is only the overall 35 years of nautical charting.

I was particularly fascinated by the two books that follow, maybe you already know because not recent, but which are really enjoy this festive period to make offer, if you did not yet got. 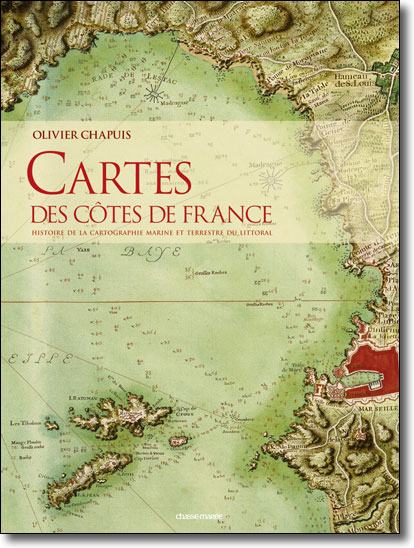 Olivier Chapuis – Charts of the coast of France

Ph.D. in History and an MA in Geography, Olivier Chapuis is a specialist in the history of charting and navigation. He has devoted his thesis ("A Sea in heaven", University Press, 1999), award from the Naval Academy and Grand Prix of the Sea Association of French-language writers 2000.

Runner off 1981 to 1989, 3th of the Mini-Transat 1983, navigator with Paul Vatine in multihull, he is also a seasoned sailor. Magazine journalist "Sails and Sailboats" for a few years, He is the author of several booklets (weather, Charting, GPS, Electronic Navigation). He also writes a blog I appreciate, which you find the link in the right lateral banner.

Olivier Chapuis tells the story of charts of the French coastline 1500 the years 2000. Advances in mapping reflect the technological advances of the early nineteenth century, then the rapid development of technical means from 1850, Finally, the explosion of electronics from the second half of the twentieth century. Exceptionally illustrated, This superb book is a synthesis of five centuries of nautical charting and land French. These documents also mention the diversity of shoreline, events and the men who manned. Masterpieces of cards are reproduced in large format, Expanding on pages, allowing more time enjoying the beauty. Presented in a box illustrated, in a hardback edition with dust jacket, it is also a beautiful object to behold in the marine book case. 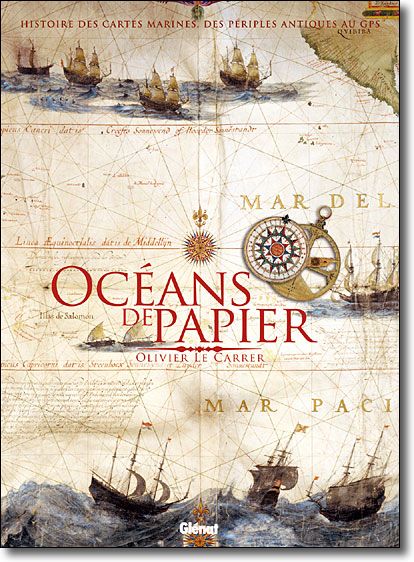 Journalist and sailorman, Olivier Le Carrer runs for thirty years most of the world's seas. Long head of the magazine "Boats", He has also authored several books on the history of the boats and the art of navigation. Fascinated by mapping, Member of the Geographical Society, he willingly explores the archives in search of unpublished treasures. He created the first library in Britain devoted entirely to marine adventure.

The image of our planet and the contours of continents have taken shape over centuries, as maritime explorations and inventions of scientific instruments. From a drawing awkward and often erroneous land and oceans, we have moved progressively to a precise visualization, not only the coast, but depths. The history of this development is fascinating, because each advance was the result of an adventure. Early voyages guided by approximate portolans to the discovery of longitude by the chronometer, position determined by the astrolabe to the current GPS, it is the imbricated story of the discovery of the seas and the charting of our planet that tells us this well-researched book, illustrated by the most beautiful charts. Here we discover the exciting evolution of knowledge from the fanciful speculations of the earliest times to the near-perfect accuracy of modern records, with a unique iconography after the funds of the National Library of France.

These two books make sense, to me, with regard to electronic charting I use today. I measure the distance covered between the heroic sailors of centuries past, braving the seas and unknown coasts, and my boater sailing assisted with modern charts and millimetric precision instruments.

When I look at old charts represented in these two fine books, I also like the back of SHOM hydrographic, during my professional visits, looked all day long on large paper maps, etching freehand corrections on hundreds of copies. A tedious but essential to the safety of mariners, which gradually disappears with the advent of computerized corrections.