The disturbances are not only atmospheric, sometimes they are also in the transmission of GRIB files !

Some of you alert me for two or three days about difficulties to receive files, or the lack of data displayed in iNavX.

After checking in requesting last night from my iPad, force me to see, once a file loaded after long minutes of waiting, that the data were not displayed on the chart. By checking the GRIB display with MacENC, appeared only wind vectors, but not the contours. So I contacted by myself Richard Ray who, thanks to jet lag, was able to react immediately. Some discussion with Jim Corenman, director of GRIB files in Saildocs (*), allowed him to discover the source of the issue, à savoir une modification de la transcription des latitudes et longitudes :

I did make some recent changes to Saildocs' internal handling of latitude / longitude, pour m’accorder avec d’autres modèles (GRIB forecasts). There's no requirement that a grib be "normalized" to -180° (West) to 180 ° (East). Grib viewer needs to be able to display any format (including positive or negative dLat and dLon). That was also the problem I ran into with other models, so I am normalizing everything internally to 0 - 360 °, without negative longitude.

So Rich Ray has, his advice, re-work its files code for x-traverse server to handle all GRIB format, and has just informed me that it was now operational. This is the result, tonight at 9:00PM : 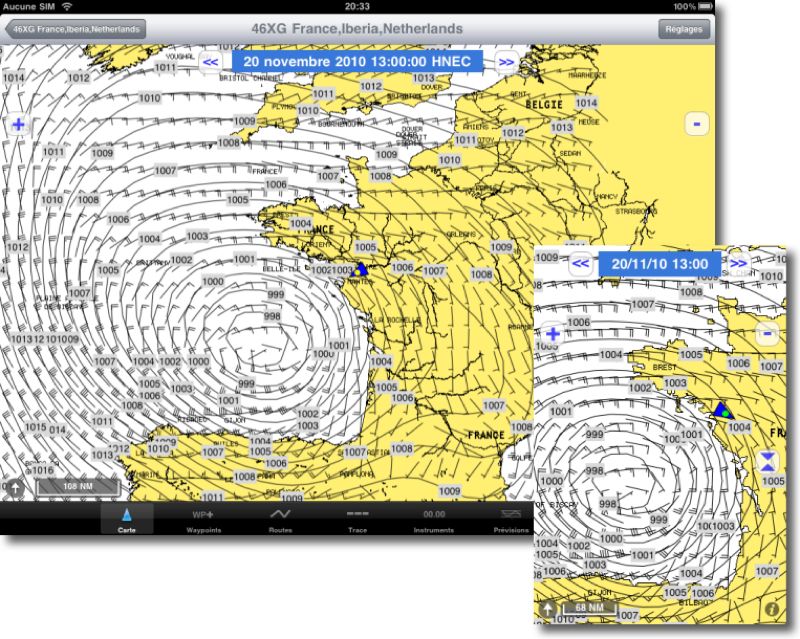 GRIB in iNavX iPhone and iPad

And the same file with MacENC :

On the other hand, Jim Corenman said they had changed their server Saildocs on last wednesday, which explained the difficulties of access to files during the hours that followed the migration.

So everything comes in order, and we can applaud the responsiveness of Rich Ray to satisfy users of its applications !