I mentioned in two previous posts, firstly the ADS-B system equivalent to the AIS for aerospace, other future satellite communications with the next constellation Iridium NEXT. Imagine the site NewScientist tells us, in a recent article dated 14 December, Iridium NEXT satellites that will load transmission devices ADS-B. Let me give you the following translation freely adapted.

These two technologies will revolutionize the communication associated air traffic in the next ten years.

The next generation of communication satellites Iridium will have a good surprise for the environment. Replacement of the Iridium constellation satellites, scheduled to begin in 2015, will modernize much more than telephony services satellite. In fact, these satellites embark a set of transmitters that could revolutionize long-haul flights, allowing airlines to save billions of dollars in fuel and prevent the emission of millions of tons of CO ².

For the first time ADS-B transponders installed on satellites will allow air traffic controllers to locate the planes located above the ocean, remote deserts or poles where there is no radar coverage. This considerably increases the safety for airlines by continuous monitoring equipment if a plane is in trouble, and also allow controllers to guide aircraft on optimal flight paths, reducing fuel consumption and carbon emissions.

The transmission system ADS-B is intended to replace the expensive radar, unreliable and short-range. ADS-B brings the call sign of the aircraft, known GPS position, its speed and altitude into digital packets of 112 bits continuously disseminated by aircraft to control stations.

But as the current radar, ADS-B messages are limited in scope. Transponders also grafted onto the new satellite will relay signals they can capture around the globe by relaying to ground stations. This will for the first time a complete and permanent vision of all aircraft in flight.

To avoid possible collisions, plans long-haul flight over the oceans currently require flying long distances from each other. Some planes can fly in the air corridors with favorable winds, while others must pass through the flow of winds less favorable. "If the air traffic control can precisely locate the aircraft in real time, they can fly on routes much closer and the most efficient routes. So, they will save fuel and reduce emissions, "said Dan Mercer Iridium Communications.

A study commissioned by Iridium showed that between the beginning of the service offered by 2017, and 2030, This technology is expected to save airlines about 7 billions of dollars in fuel and reduce emissions of carbon dioxide and nitrogen oxide 35 million tonnes. Another projection that focused on some flights over the North Atlantic argues that the ADS-B in orbit will allow airlines to save 110 million in fuel and 300.000 tonnes in emissions 2018 only.

The system can "improve the efficiency of the management of oceanic air traffic by reducing aircraft separation distances and allowing greater route optimization», says Pauline Lamb, Director of Operations, National Air Traffic Services in Prestwick, United Kingdom. She added that her organization is working to fully understand the benefits it will bring.

Meanwhile, one of the largest firms of air traffic management in the world, Nav Canada à Ottawa, Ontario, a formé Aireon, a joint venture with Iridium. Aireon will operate and provide the service of ADS-B transponder airlines and suppliers of air traffic control. 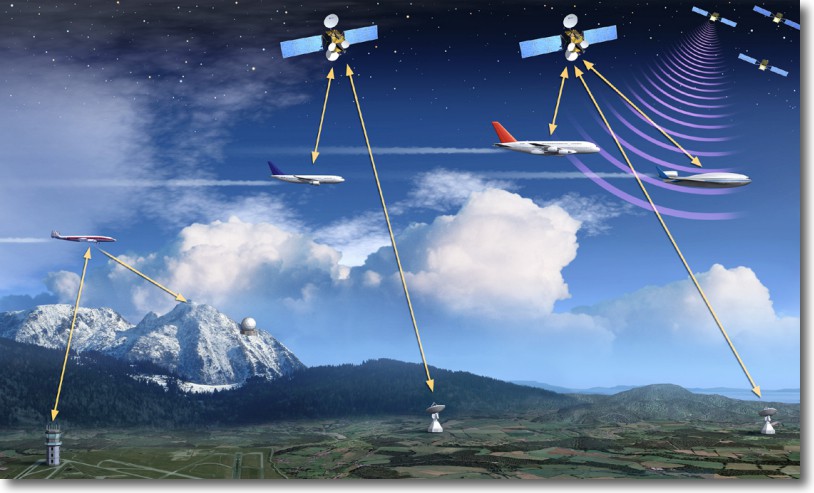 All this has not much to do, you could say, our maritime activity. Certainly. But when it comes to means of navigation or communication, it is interesting to see the evolution of technologies that affect us indirectly. One could imagine embarking on these satellites systems AIS transponders to monitor all the vessels around the world, why not ?

One Reply to “ADS-B transponders on future Iridium NEXT satellites”