Since the introduction of this new iPad and installing the new OS on my devices (iPhone 3GS et iPad 1), I wondered about the benefits that could draw boaters users, compared to previous model and system.

Apart from the cameras which are considered by all observers, quite disappointing, iPad 2 seems to obtain unanimity from all specialists (¹).

"Pictures do not do justice to the iPad 2, it is really, really great when held in hand. iPad 2 is beautiful and has been designed with great intelligence "

"Although this is an evolution rather than revolution as the first model, changes made by Apple are generally pleasant and positive […] I recommend against many competing tablets I have tested so far, especially with a price of entry remains attractive "

But what's best for yachtmen ?

I thought through all the comments of my colleagues warned (¹), reviews, Forums, I find nothing that significantly improves marine use from iPad. A processor twice faster ? Double RAM capacity ? 115 grams less at arm's length ?

The screen resolution remains the same, autonomy also. No change in A-GPS chipset (just an update) or performance of localization. We know a little more from disassembly by iFixit on components of the 3G model, only the components have been modified 2G/3G. 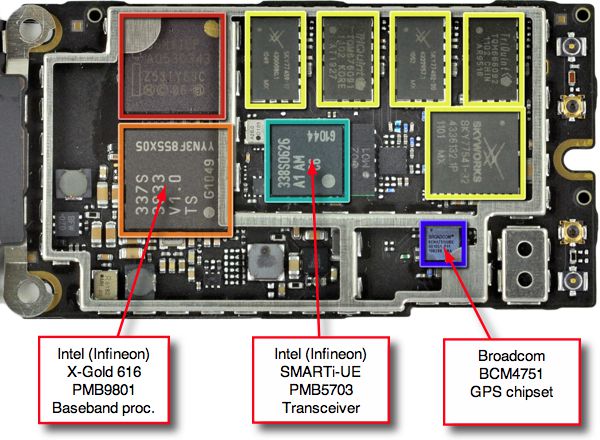 The components of the iPad2 3G - Source iFixit

About the latest operating system, iOS 4.3, I have seen no improvement in the use of my favorite applications. Improvements and innovations do not directly concern marine use. However, Rich Ray advised that iOS 4.3 had resolved a major memory leak which affects some applications, as iNavX, but only on iPad.

No need to rush to buy this new model if you already have the first. And good for the new buyers will benefit improvements for the same price.

Je sais que ce n’est pas « commercialement correct » mais je me permets déjà quelques supputations sur le modèle suivant. I do not really see how Apple could improve the design already extremely successful (fineness, lightness). So it's certainly within the machine as it happens. First, to satisfy the moaners, new cameras more efficient. Then more high-definition screen technology. Perhaps the media Thunderbolt (²) Finally, allowing high-speed connectivity with peripherals. My dream would be an iPad for the physical connection of instruments, not only in WiFi, This could allow some manufacturers to connect their devices, such as satellite phones, for example, for receiving GRIB files off.

One can always dream, isn't it ?