Since the beginning of the navigation season, many boaters have found an increasing number of errors on Navionics charts, as a result of recent updates, all media. A bit everywhere in Europe, Germany, Baltic countries, French coasts of the Channel and until Spain, appeared non-existent channels and erroneous soundings, missing soundings, missing information, contradictory bathymetric information depending on the zoom levels, and so on. The most important is that these findings are made by assiduous users of long-standing Navionics cartography, experienced navigators.

The first to having informed me is Jochen Luhrs, the German translator of iNavX, with whom I recently collaborated in the writing of tutorial iNavX in this language. He sent Navionics support email documented with screenshots of the many deficiencies noted during its summer sailing. In the same time, several threads on the subject have been developed on the french forum Hisse-et-Ho or the sling is organized. Some contributors of this forum were sent also to the service help@Navionics.com their findings. This forum is public, I extract some telling quotes, the authors will recognize :

" Back from Holland, I noticed many differences between actual soundings (corrected potential gap of tides) and values of the sounder. Back in France, I am surprised to find out about new versions of the Navionics charts a channel around the island of Tatihou close to St-Vaast-la-Hougue. "

" I've done there is more than 6 months attempting to report to Navionics that many soundings contours in the small port of Burela in Galicia were completely crazy over the official charts and all other electronic charts soundings. "

" […] Comparing, about Perros-Guirec, Navionics SonarChart updated a few days ago with the ordinary Navionics chart : Martian channels arise on the foreshore in front of the Harbour, and, Lo and behold, There are now two benches which discover before two pontoons, including mine (For those who do not know : the underwater quay that surrounds the port provides at least 2,5 m of water […] everywhere). "

So, What happens to Navionics ? I have promoted this charting, mainly for iNavX, I have it widely used and considered so far as being certainly the better designed and better update of private vector charts. Unfortunately, marketing orientation of Navionics to risky choices confirm the fears I expressed five years ago (¹). The recent deterioration of charting quality is undoubtedly the consequence. 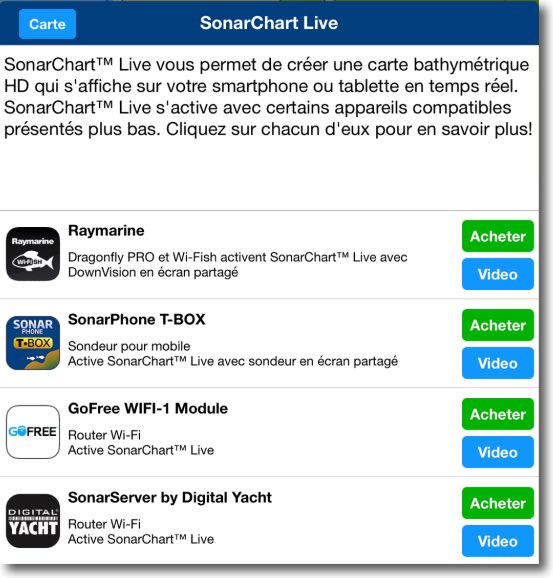 The concern to maintain the application Navionics Boating (ex-Navionics Marine) in the first rank of the navigation for mobile apps has generated the bright idea of offering users to feed, by their own identified of soundings, bathymetric charts called SonarChart. These charts with the sole purpose to improve the marine recreational fisheries ground contours. Navionics has developed support of different sounders among the most used by boaters. Data collected in real-time during journeys are sensible feed a Community database for this purpose.

It seems however that the reality is a little different, and that SonarChart have only actually collected interpolated details. Otherwise, What credit make to data collected by Mariners fans ? As expressed by these users :

" I find it absolutely incredible, or even criminal, Navionics alters its charts […] using soundings provided by users who are not really able to give absolutely accurate information. "

" When we know how seriously the hydrographic survey by official services are performed (even if they are old) one can remain stunned for the fact that a regular boater, often unable to do a calculation of tide with twelfths rule, can transmit information affecting the safety of the ships to a provider of electronic charts. "

I agree more with these remarks that I already spoke in this direction in the past (¹). But this is not the worst.

In Navionics Boating app, you can switch between the 'nautical' so-called chart and SonarChart. The first being to navigation use and the second to fishing use. This is what expresses Navionics customer service to a user in response to an error report, I quote :

" […] We also remind you that the layer Sonarchart is not suitable for a safe navigation, it is useful for locating fishing areas at any depth level. While navigating, make sure you have activated the nautical charts.
Navionics Customer Service".

Surprising response regard to maritime safety. Even more surprising than the recent updates of the Navionics charts (all media) provide many mistakes that seem directly from data displayed in the SonarChart, unable to correct in iNavX or in a chartplotter because they have no alternative to display.

Below the two versions of the same chart in Boating HD, but there seems to be a reversal. The map on the right should be the Navionics "navigation", and I hope that the absence of soundings has been corrected subsequently (I have not subscribed to Navionics+).

Navionics chart (navigation) left, SonarChart right. Charts appear reversed. I have soundigs at left, not at right. This is however not the last update.

Left, the two channels in blue do not exist and a risk of grounding. This area is covered with oyster farms, only motorboats pass on above mid-tide. Found the same chart in the last Navionics Gold 46XG for iNavX update (from the X-Traverse server) : 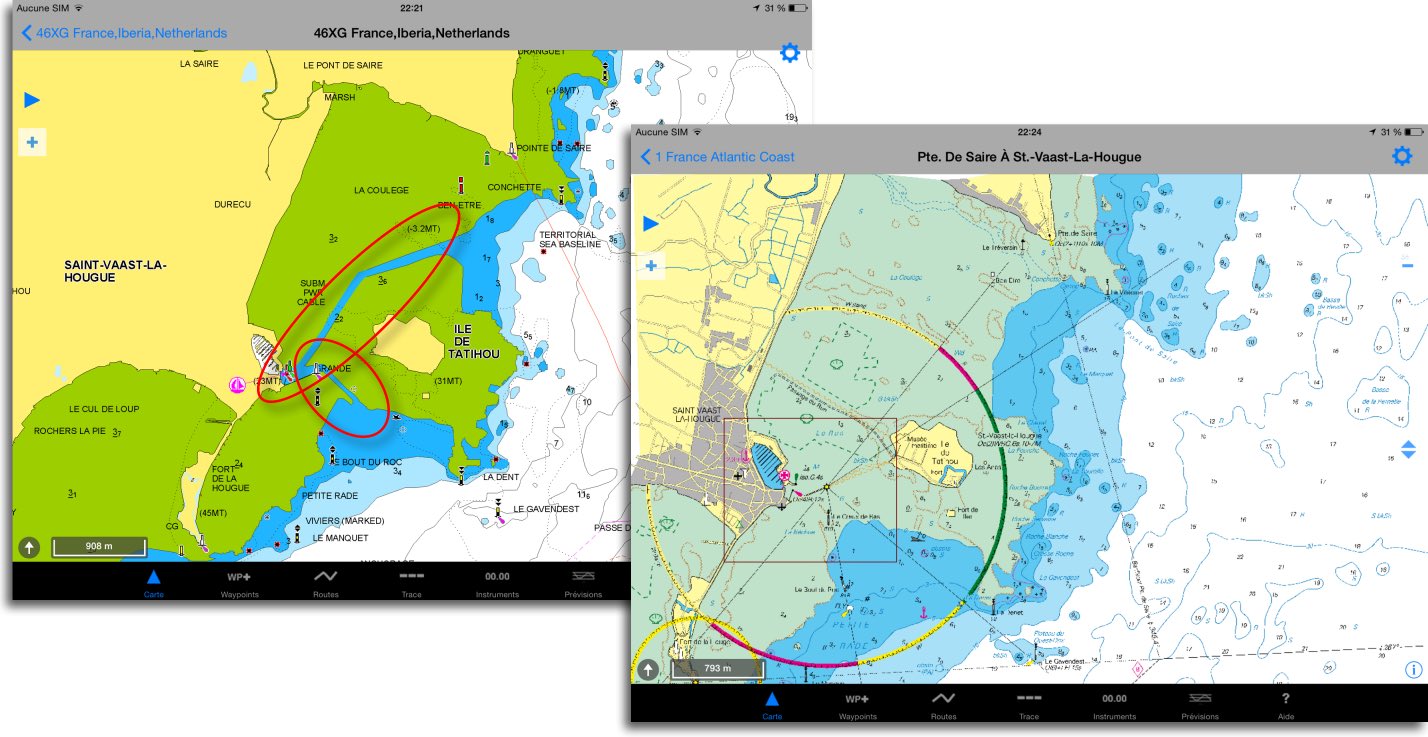 Another example in Perros-Guirec, two successive updates with appearance of "Martian canals". (see above) raised by a contributor. It is understood that these channels are totally wacky. 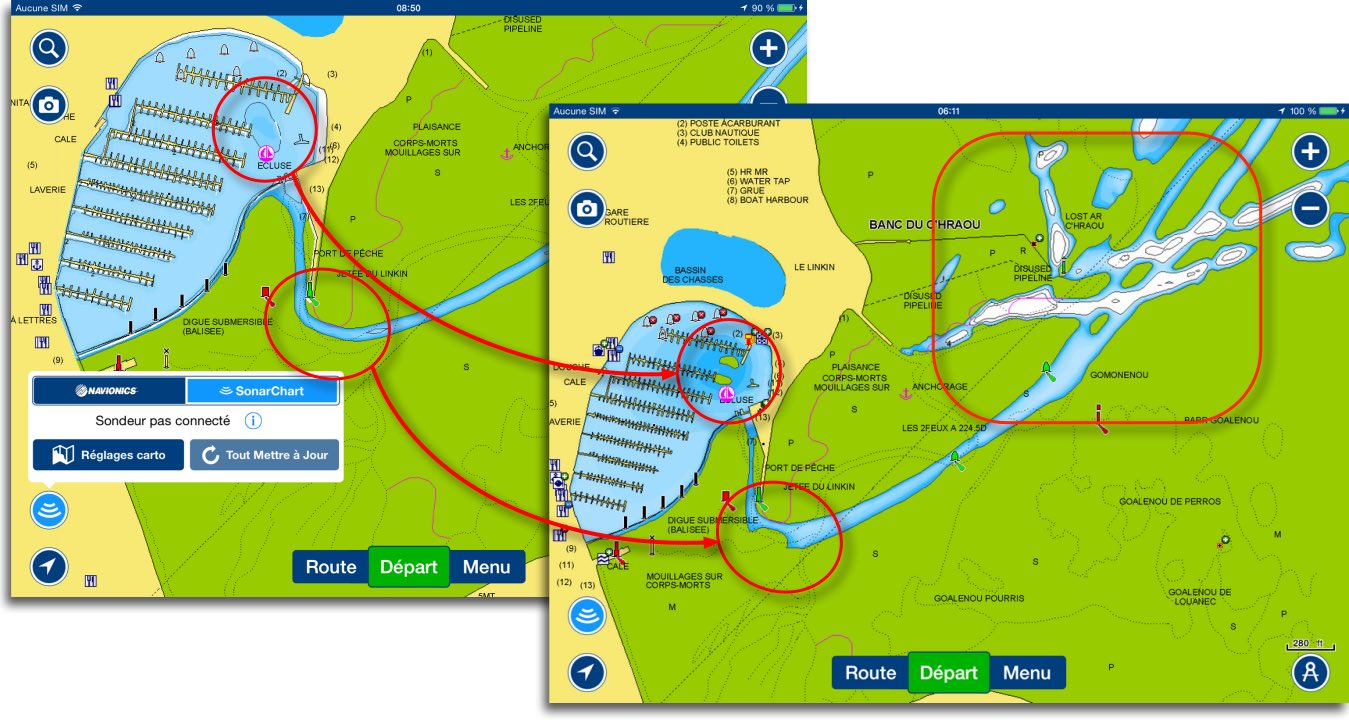 Below, la version Navionics « navigation » (correct) compared to the raster NV Chart issued from SHOM. Found but minor details the same Navionics chart in iNavX (Indeed the alignment of the two leading lights at 224° is not drawn).

The map on the left in Boating HD by selecting "Navionics" has not been changed and looks correct.

If Navionics does not quickly aware of rapid degradation of its products, It is likely that boaters will turn to other more secured solutions. With the rapid advent of’Open Data' within the European administrations, boaters will certainly access public charting at lower costs, or even free soon. Today, It is already possible to use in Weather4D Android all SHOM electronic raster charts catalog (60 €/year) , UKHO, and other official publishers. Soon it will be available in a future iOS version. The SEAiq application also allows to use the official vector charting ENC S-57.

Private vector solutions (Transas TX-97, Navionics, BlueChart, C-Map, aso.) should a sacred level of excellence to maintain their economic model the day that European hydrographic services will be free as those from NOAA. Also to deal with outsiders that point for some time on the market (²). And this is certainly not a random bathymetry that can make the difference, need to put a little more seriousness and professionalism.

The Navionics 46XG update dated the 26 August 2015, available for iNavX on the website X-Traverse.com, did disappear the contentious "Martian channels". This update has not yet made an announcement by Fugawi mail as usual when major updates. Thanks to the user who comes to warn me. No info on the other folders. 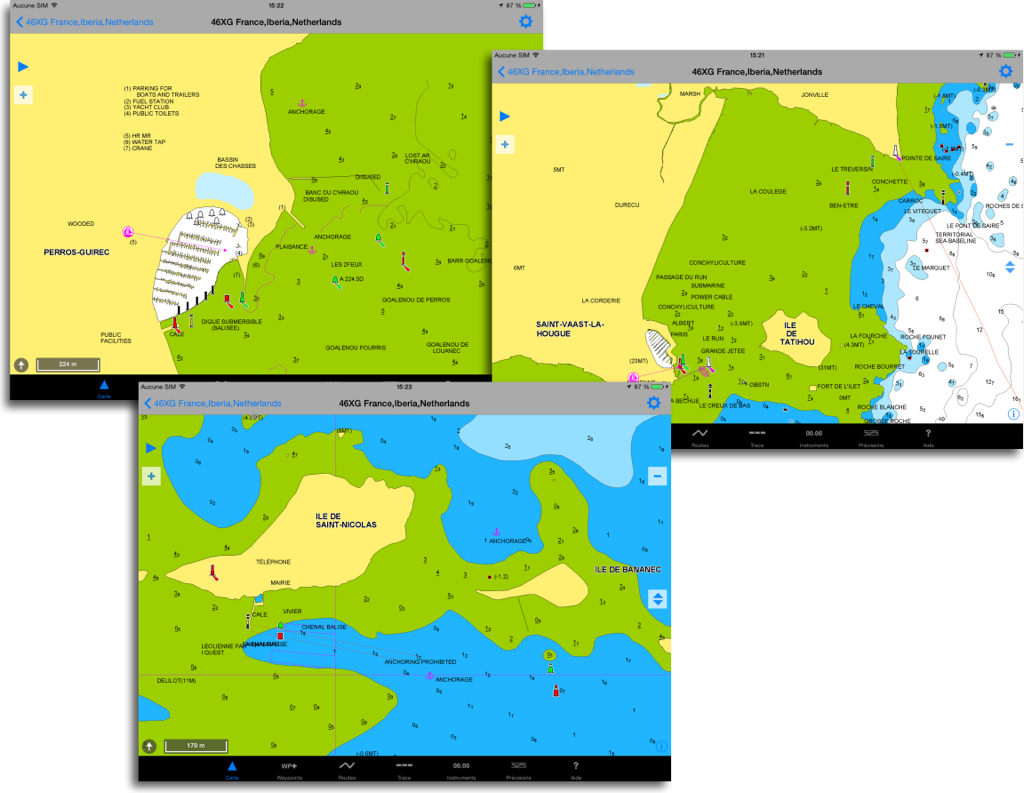 The last October updates have removed the bathymetric data from all standard cards SonarCharts. But Navionics does not abandon the SonarCharts, major selling point.

14 Replies to “Is Navionics Cartography Getting Dangerous [Update] ?”