I relayais in December 2018 an excellent issue published on the blog of our friends Geogarage, which are a permanent duty of a press review of the best foreign articles about mapping, meteorology, and generally all matters relating to marine navigation. Here is a translation freely adapted and commented in French.

It is well established that the European weather model IFS (¹) the European Center for Medium-Range Weather Forecasts (²), produces on average the most accurate weather forecasts in the world. For years, American model Global Forecasting System (GFS), managed by NOAA National Weather Service (³) , only ranked as the third.

Le rang de « mauvais élève » du modèle GFS américain a attiré l’attention du Congrès, which has appropriated money to the Weather Service to improve USA’s weather modeling on multiple occasions. Already, après le cyclone « Sandy » en 2012, whose final trajectory upon New York had been only anticipated by the European model, the US Congress, by an additional budget, enabled the NWS to make big progress with successful start to the GFS redesign early 2015 (⁴).

In addition, the US administrationhas stated that building the best prediction model in the world is a “top priority.”.

A new analysis of model performance during Hurricane Lane, which unloaded historic amounts of rain on Hawaii’s Big Island, shows that the Weather Service may be making progress.

The NWS has developed a new version of GFS, known for FV3 (Finite Volume Cubed-Sphere dynamical core), which he calls "the next generation global forecasting system." Although still considered experimental, the FV3 produced the most consistently accurate predictions of Lane's track. The NWS said : 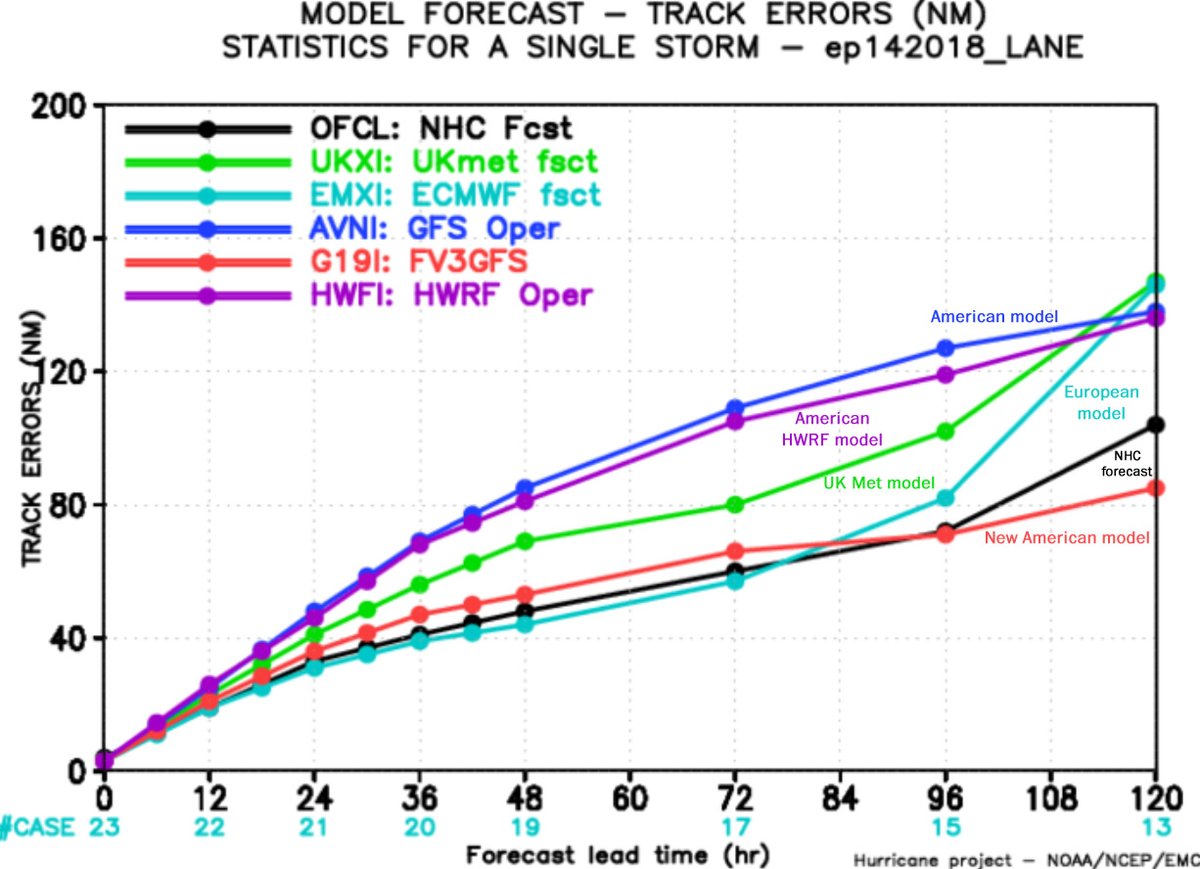 Although the FV3’s results were very promising for Hurricane Lane, at the moment they only reflect a very limited case. To be convinced that this new modeling system could reduce the gap with the European model, we will need to see such performance repeated, storm after storm and in everyday weather situations, from the tropics to the poles.

[Update 12 June 2019] This Wednesday 12 June, GFS model-FV3 has just been announced as operational.

The FV3 dynamical core divides the atmosphere into small cubes arranged on a grid and computes the changes in winds and pressure within each cube as part of a model's forecast. Models using the FV3 have the capability to zoom in on storm systems to improve predictions. Here, we see a satellite image of Hurricane Sandy with a stretched version of FV3's cubed sphere grid, zoomed in on the hurricane.