A year after my advocacy for free European data (¹) Météo-France finally offers free access to its two famous ARPEGE and AROME models. A welcome development, initiated in 2014 by the success of MyOcean, Since then integrated into Mercator Ocean (²), but a notorious change in attitude for a public institution to which always asked to self-finance a significant portion of its budget. Forecasts from these two models are made available on Météo-France portal in the GRIB version 2 format. Since the 21 July 2015.

In a press release dated 31 October 2012 entitled Opendata (³), the Government had confirmed the continuation of the steps of public open data. These steps following the Digital Agenda (⁴) published by the European Commission, which stated that "Open data refers to the idea that some data should be freely available for use and reuse " and citing as an example : " … igeographic information, statistics, meteorological data, data from research projects funded by the State, and books scanned from libraries ".

Cited by the forum InfoClimat (⁵), the Direction of Météo-France :

" … has explained that the opening (available free on the internet) of our model outputs is an opportunity to defend our positions, and not a threat, even if in the short term, this can cause a small drop in revenue..

This notion of "small drop in revenue", that should worry the public institution staff, request an analysis. Looking closely, in the program 170 "Meteorology" of the Senate (⁶), analysis of Météo-France budget reveals an overall drop in commercial revenue :

" … the fees collected for the provision of public data are at about 2 million euros per year, knowing that most raw data produced by Météo-France must be made available free of charge. "

However it is necessary to see that these commercial revenues (35 M€ in 2014) represent less of 10% of the total annual budget of Météo-France (± 400 M€). The share of royalties collected for public data turns out to be minimal (less 6% commercial revenues). The generalization of this free will weigh so not heavy on the accounts of the institution, even in times of cost containment imposed by a strong budget constraint. In return, Météo-France will not only enhance its reputation by widely distributing its quality products to a quantity of actors affecting the general public : weather web sites, developers of specialized weather applications, service providers, aso., just like the NOAA since most of 20 years.

The GRIB files are made available on two web pages of Météo-France public data :

Warning, These files are in the format GRIB V.2, a format that is not yet managed by many applications, not even Navimail2 ! Developers will have to quickly adapt their products to make them compatible. They will be also faced with another problem. Free files refers to a manual download. To automate the process of downloading data from applications, need to subscribe to a Premium service :

Un service « Premium », subject to tariffication in the year (15 K€), to obtain the Arpege and Arome daily automatically data set, with release conditions stabilized (better bandwith capacity). This service can also benefit from a better resolution for the data from the model Arome, but at the expense of the number of available parameters.

Suffice to say that only "sizes" among developers will be able to afford such a service, and will inevitably have to charge back to users by the mean of subscription, as typically American high resolution WRF GRIB files. With a modest subscription from 15 €/year, for example, a developer will only fit into its costs only if he knows how to count on 1000 annual subscribers. The best win !

Olivier Bouyssou, French Weather4D developer that I no longer introduce, has reprocessed the GRIB V.2 file to allow me some display examples. 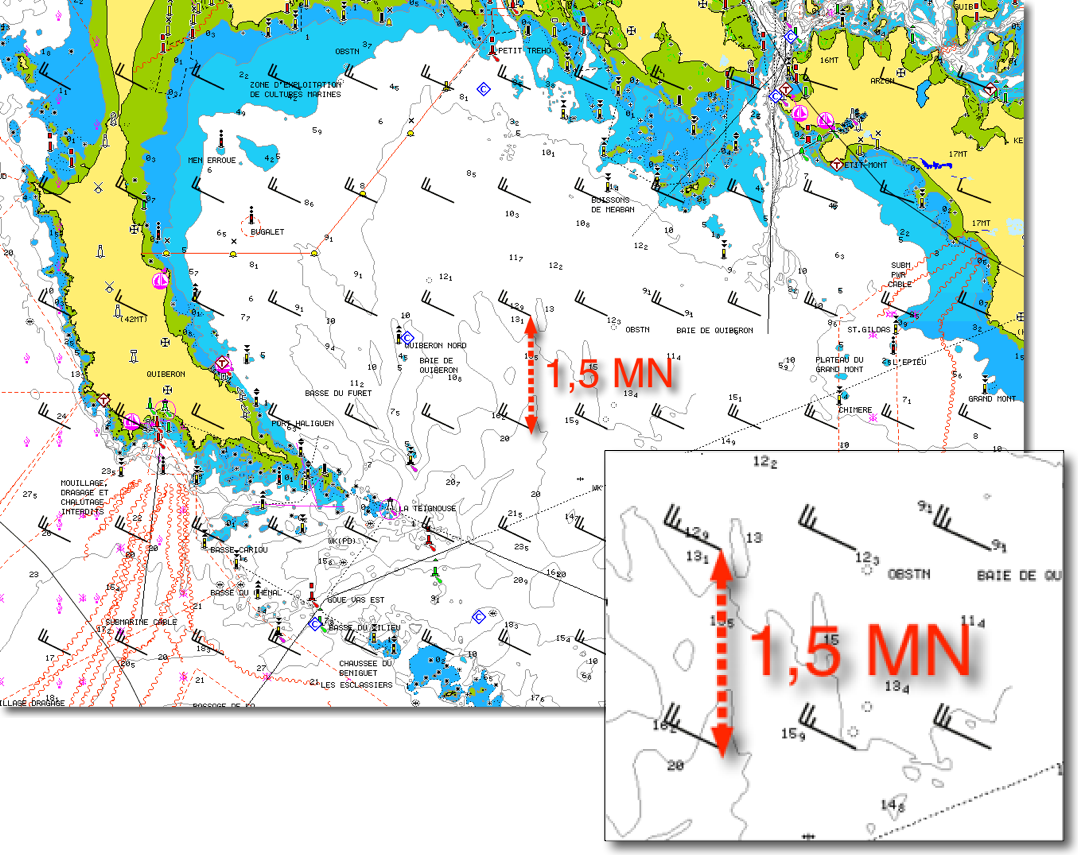 Realizes here fineness of the grid. The sailors will be able to achieve sharp routing in the coastal course, knowing that you can combine predictions of currents at the same resolution (MyOcean IBI 1/36° in Weather4D). 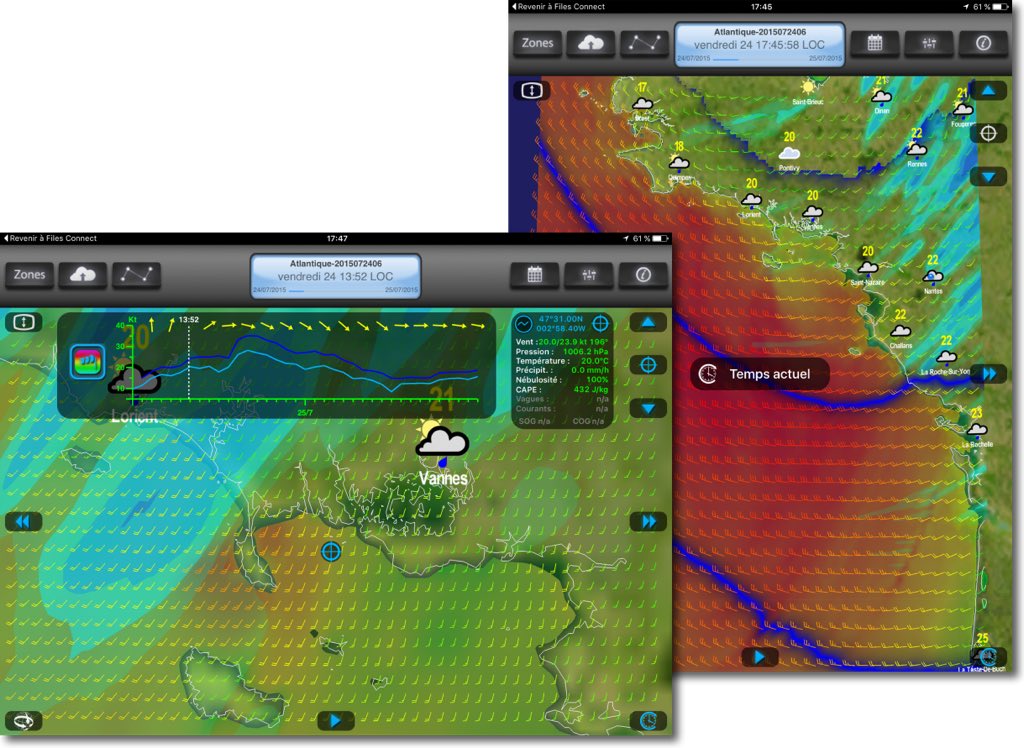 The AROME model displayed in Weather4D. Note the fineness of rainfalls shown above.

The ARPEGE model for the world, despite its range limited to 4 days, has nothing to envy to equivalent resolution NOAA GFS model . His declination to horizontal resolution of 0.1 ° for Europe is considered as better than its competitor WRF. The AROME model is the finest available for the coasts of France and neighbouring countries. This sophisticated model can integrate the effects of landforms and the effects of thermal breezes. These two models are constantly improved :

"Digital models AROME and ARPEGE, that simulate the evolution of the atmosphere, have also evolved. Their spatial resolution has been improved. The regional model AROME […] has thus given its horizontal resolution pass 2,5 km to 1,3 km. The relief is now depicted more realistically in AROME.
The representation of physical phenomena in models has also increased. The new version of ARPEGE, that is global, for example benefits from a better modelling of clouds type cumulonimbus and precipitation associated..

So we have everything to gain to use these models to our own coasts, but also to confront them to American models, and so finally benefit from a high quality alternative in the decisions that we will have to take at sea. Bravo to this opening, and strongly that these models will be operational in our favorite applications.

—
(¹) Advocacy for free European data
(²) After having successfully coordinated the European MyOcean projects since 2009, Mercator Ocean has been formally appointed by the European Commission the 11 November 2014 to implement and operate the "Copernicus marine environment monitoring service" under the European Earth observation programme Copernicus.
(³) Press release by the Prime Minister of 31 October 2012
(⁴) Digital Agenda for Europe
(⁵) http://forums.infoclimat.fr/topic/85261
(⁶) Finance Bill for 2015 – presentation notes
—