At all times the sailors had the fear of the sea fall. Even with a trained crew, the operation of recovering a crew water fallen is risky, Already with the engine, even more with the sail. During my training years in Glénans Sailing School, each boarding was the opportunity to train consistently with this maneuver, sailing, striving to come "die" heave to windward of the unfortunate, fortunately materialized by a buoy moored in a bucket as drift anchor. But the real problem was not there. It was above all not to lose sight of the crew, because come back to its fall position "reckoning" was virtually mission impossible. And today, with our sophisticated electronic means, it's not as easy as it sounds good…

Nowadays, with a plotter or a tablet provided with a GPS, we think we can easily go back to a man overboard with a MOB function (Man Over Board), but it's ignoring a paramount variable : the drift. (¹)

Leeway drift is defined as the motion induced by the current and the wind affecting the surface of a floating object. The components of the drift include speed and angle of displacement, representing the speed and direction of movement. In the case of the rescue operation of person at sea (MOB), the effects of drift can significantly alter the position of the MOB, especially in case of delay in the start of the operation.

The calculation of the drift can be divided into two different cases : low wind and high wind. In the first case, the wind on the floating object is significantly lower than that caused by the current and the wind can be neglected in the estimation of the drift. Accordingly, the object drift trajectory is obtained by integrating the velocity. The inertia of the body for small masses, such that the person in the water, is often ignored because the speed at steady state is reached quickly. Alternatively, a strong wind causes a significant force on the surface of the object and this must be taken into account in the calculation of the drift. In case of strong wind, the drift will be composed of both the ocean current and relative velocity of the object compared to ambient water, according to its "windage".

There are different methods to determine the current speed. Firstly, Ships are increasingly equipped with sensors capable of directly measuring the current. Then, local observations of current could be used, but if the distance between the person and the ship is important, in this case the measurement of the current carried by the ship may not be enough accurate. At last, tidal atlas can provide information on the fields of the current vectors, and more recently current predictions available as GRIB files. 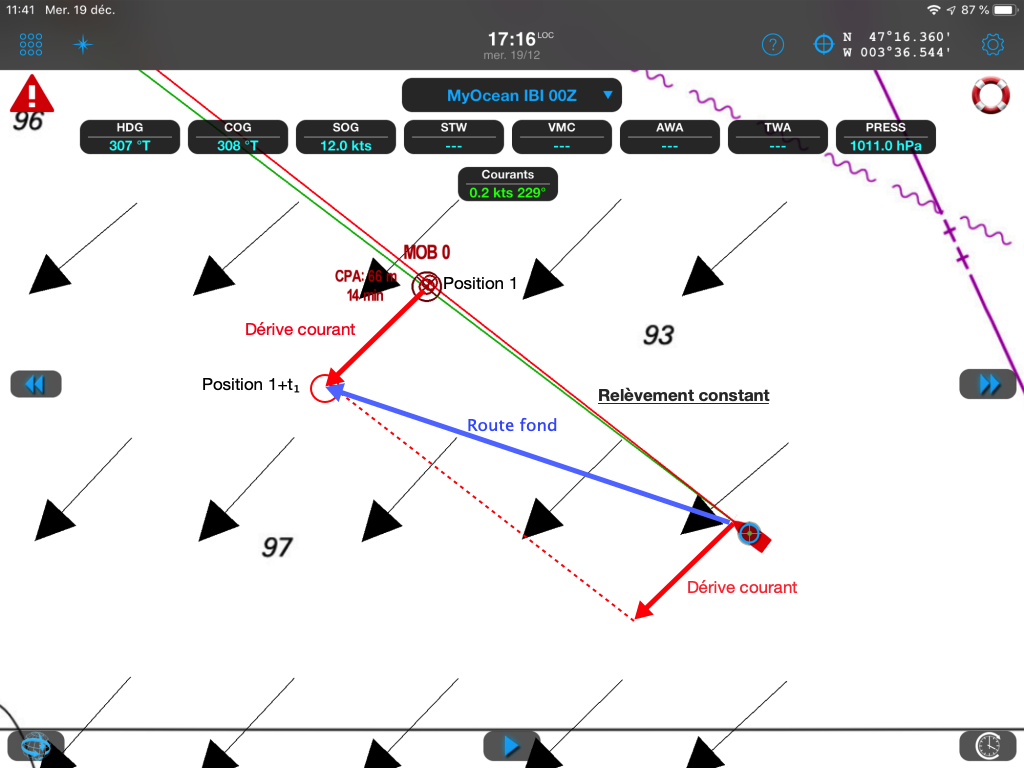 If the ship and the man overboard experience the same current, speed, and drift direction, the increase in the MOB remains constant.

If the speed of drift current is assumed to be equal all around the ship, drift affects the ship and the MOB in the same way, meaning that the relative movement between the objects will be the same. In other words, Once the relationship between the current location of the vessel and the MOB was determined, the effects of the drift due to the current can be excluded from the dynamics of the calculation if, and only if, the distance is not too great. Otherwise, a precise estimate of the current undergone by the two moving parts is essential.

Empirically determining the effects caused by the wind on an object is a difficult task. Instead, field experiments measuring the drift of different objects were preferred and have been studied excessively. The data analysis shows that the relationship between the wind velocity and the drift is almost linear, thereby approximating the effects of wind by linear regression. So, this approach, induced drift by the wind is calculated by the formula : (D = aW10 + b) in which a and b are constants and W10 is the speed of the wind measured at ten meters from the surface. Depending on the position of person in the water, it has established the following table :

A MOB in HELP seat position may be derived about 150 meters in 20 minutes by 20 knots wind.

The wind speed is not always measured by the ship's sensors (in example : motorboat), which makes it difficult to estimate the leeway drift. On the other hand, ships are often equipped with sensors to indirectly measure the current speed, which is obtained by subtracting vessel's velocity over ground from vessel's velocity related to the water. But the wind drift is not equivalent to the ship and MOB. Ship's windage, determined by its projected surface, generate a higher drift speed than the MOB. 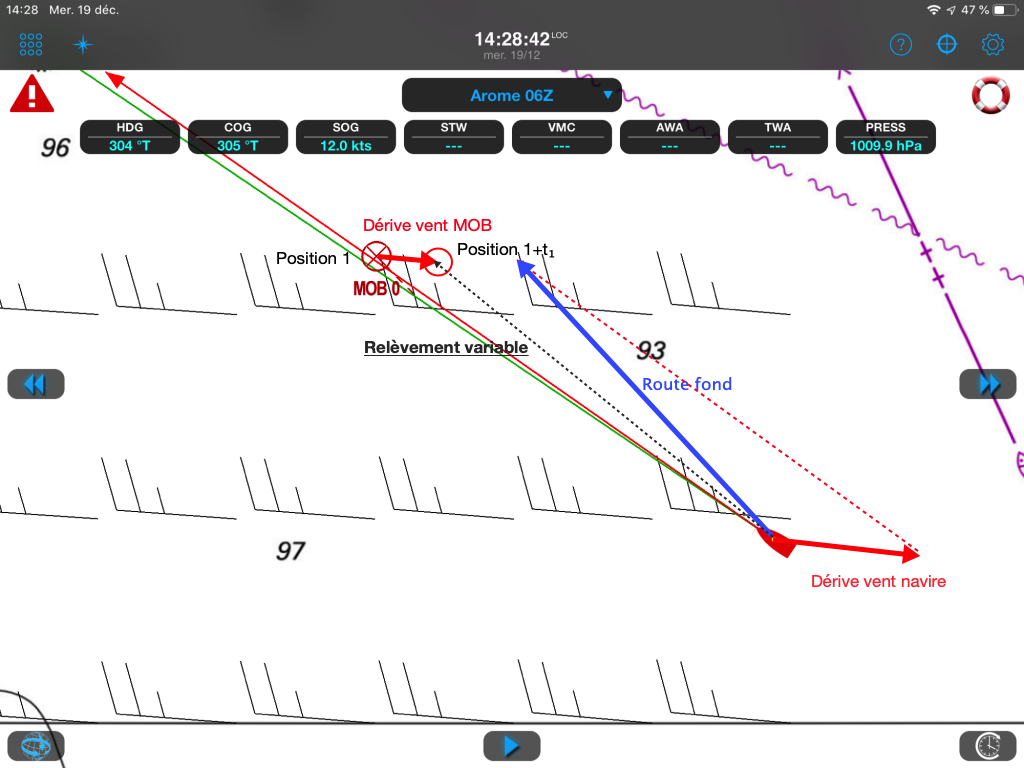 The calculation of the drift is essential to determine the passage of the last known position to the current position of the man overboard. A relevant estimate of the last known position of the person is the ship's GPS position at the time of the accident. To estimate the displacement caused by the drift, the time between the beginning of the accident and the start of the rescue operation is multiplied by the drift velocity. It is therefore imperative to take into account these elements to hope going back "blindly", that is to say only with instruments, to the water fallen crew.

Weather4D considers this theme with three settings allowing sophisticated calculation of the relative drift of the man overboard and the boat : 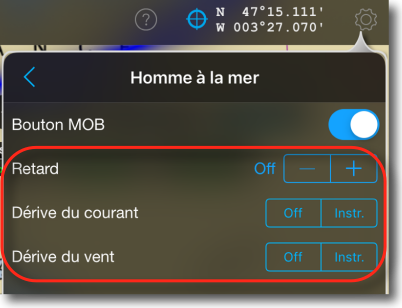 The consideration for the calculation of these three settings, time lag and drift, allows to display on the map, as with an AIS target, the respective locations of the boat and the MOB. The helmsman must strive to maintain a course merging these two locations (CPA = zero meter). 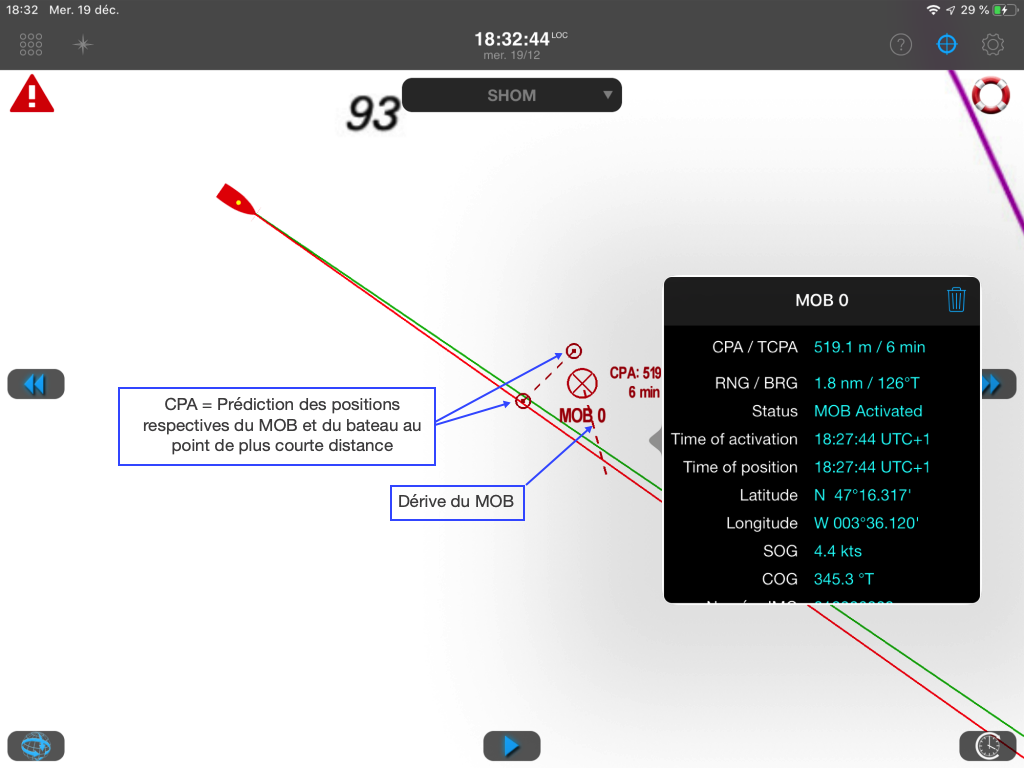 As an AIS target, Calculation displays the prediction of the respective locations of the MOB and the boat at the time of CPA. The coxswain must keep the two prediction points superimposed.

The limits of the MOB function

In a rough sea, with a strong downwind, in the worst case under spinnaker and maybe at night, even an experienced crew, time to implement a recovery operation may take several tens of minutes. lower spinnaker, upwind in the breeze, reefing, starting engine, all these actions, even carried out without panic, take time. The lost time will be more than double the return time to the man overboard. More distance increases, the harder it becomes to locate the target.

The help of electronics is undeniable in these circumstances, but still need to have accurate and perfectly calibrated instruments necessary to calculate, a plotter or application permanently connected instruments, and a good dose of luck. According to the water temperature, the physical constitution of the person, his clothing, if he is provided with or without a lifejacket, the survival time is limited.

Estimated survival time, according to the corpulence of the person (³)

In the same way that routing, MOB is based on sophisticated calculations based on data that were inherently part of randomness.  It is therefore only aid, certainly valuable, but not infallible.

We can not emphasize this enough, the ultimate solution is to not fall into the sea ! Since the widespread use of self-inflating jackets, little bulky for maneuver, it is imperative to require the wearing, day when reducing the wing, night in all circumstances, and ensure that the harness tethers are hitched on robust lifelines. Unlawful to relieve themselves in pajamas rear balcony, at night under spinnaker !

Despite these precautions of good seamanship, we can now add to life jackets a personal AIS beacon that will even more accurately to locate a MOB. Most pleasure boats being equipped with AIS receiver (and increasingly a transponder), the height of the VHF antenna provides a wide area reception range, even with a significant wave height. For example tags SIMY My-AIS automatic triggering announce a range of 5 to 10 nautical miles and are an excellent way to optimize the recovery of the crew in the water.

–––
(¹) The considerations in this article come directly from a university thesis signed Karvinen Atro the full text can be downloaded in English in PDF format from this website.
(²) The sensor Airmar DX900+ provides the speed of lateral displacement, so leeway drift. Its data in two axes combined with the movement on the ground, calculation is available to deduce the speed and direction of the instantaneous current. This sensor is supported by Weather4D.
(³) Source : Dielette and sea / Blog
–––

6 Replies to “Man Over Board”