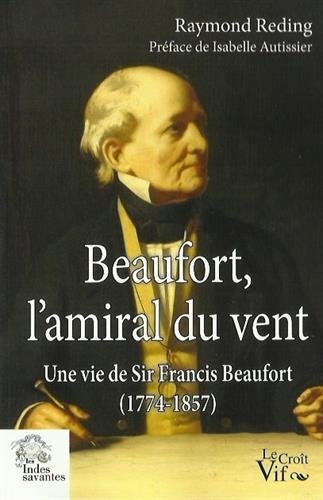 It's a long time since I had made a reading note in this category. Lack of time, or lack of discovery ? I found again a real literary enthusiasm from reading this excellent book by Raymond Reding :  " Beaufort, Admiral wind ".

Like any sailor that complies, I know the Beaufort scale since my first legs in sailing school, but, shame on me, I never wanted to know more about this famous Francis Beaufort ! Raymond Reding, went like me through Les Glénans Sailing school, finally fills this gap with the dismal delight.

Both biography and adventure story, his book will "recognize the part of the legacy left by Francis Beaufort to mariners of our time", as he expresses in his prologue. It invites us to a "maritime adventure, geographical, a journey through time and space, the vastness of the oceans" as Francis Beaufort crossed during his long life.

Embarqued in 14 years old on a merchant ship as aspiring trainee at captain's service, he will pursue a long and labored career in the Royal Navy. Passionate about astronomy and cartography, initiated since his teens in the use of sextants, watches and other measuring instruments for which it demonstrates a certain disposition, he produced throughout his sailing journeys an immense work of maritime cartography that will be later the Hydrographic Service of the British Admiralty which he will head decades later.

Its multiple embarkations in sailing ships have also raised questions about the strength of the wind and atmospheric phenomena which nothing was known in his time. It develops the visionary idea to collect all the detailed records of observations around the world by ships of the Royal Navy, to establish wind maps which should help to understand the phenomena that cause. In 1806, he took the idea of ​​a wind scale outlined by several predecessors, refines and quantifying thirteen levels the wind by successive reductions wing it imposes the vessel as it increases. But its scale will be introduced in 1829 to the Royal Navy, and only ten years later it will be imposed by the Admiralty to all units of the Royal Navy. And only the International Meteorological Conference 1853 the international reference for estimating wind strength. Beaufort was sixty nineteen !

The eventful story of Francis Beaufort career also passes through the equally turbulent era of Europe, from the French Revolution until the Napoleonic wars. Raymond Reding gives us, for once, a helpful vision of British perspective. A historical reminder that fills me for the inadequacies of a whimsical schooling.

A fascinating book, instructive, indispensable to the general culture of the boater that I am. It is never too late…

Surgeon in Brussels, professor at the Catholic University of Louvain, member of the Royal Academy of Medicine, passionate navigation and maritime history.