Announced for three months, the first version of TimeZero last few days is available for iPad. Under the brand Nobeltec, purchased by Signet S.A., MaxSea holding company (¹), this free application contains a simplified design suitable for the tablet technology that has made the reputation of the French publisher.

I was waiting with curiosity for a while the position taken by MaxSea about the iPad phenomenon. The least I can say is that I'm not disappointed. The publisher lined up on the competition by offering a free application and providing its MapMedia charting at average price of 45 euros by region, with a fairly consistent cutting currently covering the Western Europe, Mediterranean, North America, Central America and the Caribbean. The undeniable advantage is the overlay with 3D satellite images of the coast by PhotoFusion technology, giving to boater the sight of the boat moving in an super-realistic landscape. In addition, chart rotations speed and failover perspective by dragging fingers is actually bluffing. We must face the facts, by aesthetic TimeZero gives quite a blow to the competition.

The user interface is both simple and well. The instruments side banner, easily removable, is fully customizable. General application settings and a limited number of functions are available in the top banner, management overlays is promptly executed by rolling the screen by tapping on the bottom right corner, and tap on the screen or an object opens the context menu of available functions. Efficiency and management of screen surface perfectly optimized. The app is particularly fast to handle.

Navigation functions reduced to the essential

For this first version, MaxSea limited navigation functions to the basics : creating waypoints, routes and tracks, display information from the GPS iPad related trip to a waypoint or a route. No external interface, no data transfer, the application is totally standalone. However, it provides basic information : simplified weather in instruments banner, tides and currents overlaid on the chart. The users of the application with chartplotter or PC will not be confused.

As the number of competing applications (but iNavX) TimeZero offers charting purchase and download in-app, directly from the application. 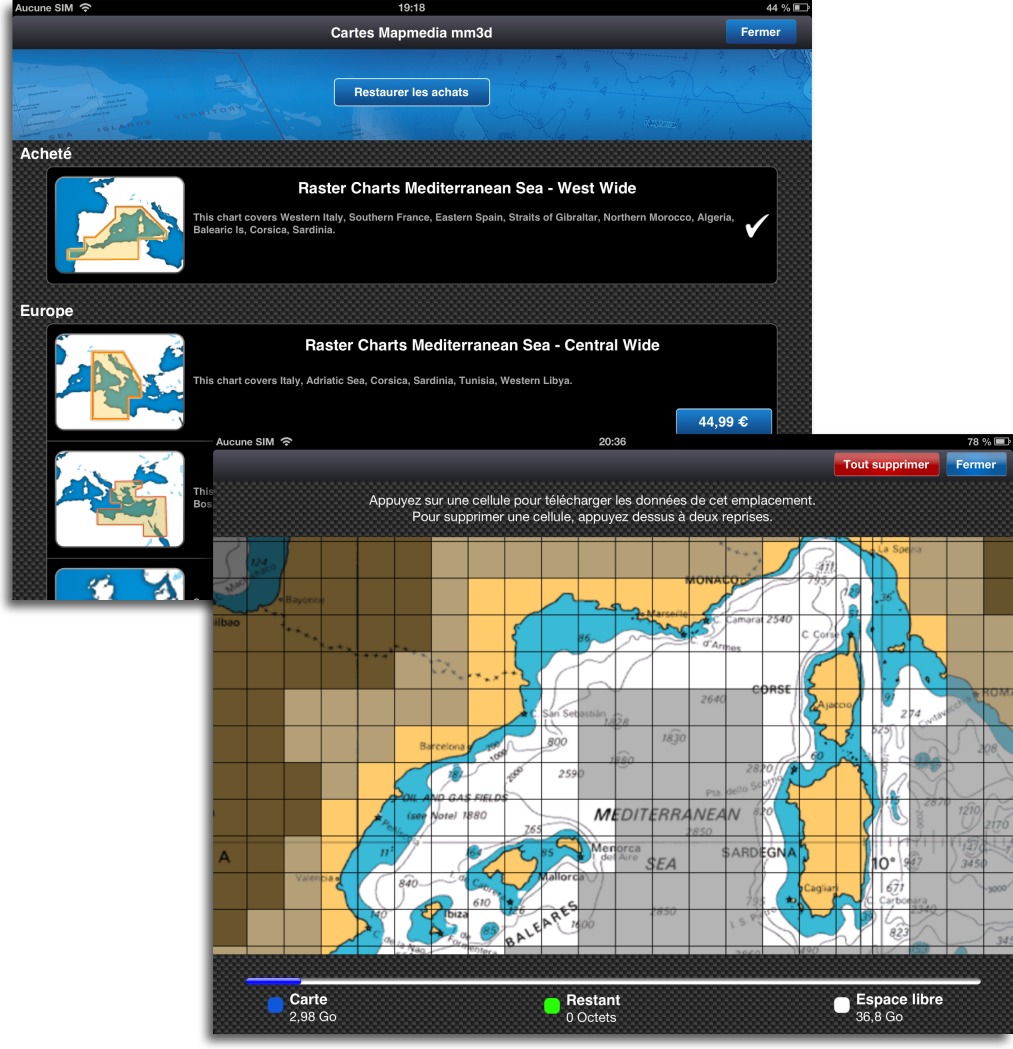 But beware, once purchased the chart region, the download is done cell by cell. It is added raster mapping based on satellite images associated. As you can see from the above image, detail cells downloaded (in clear on the screen) already represent 3 GB of file, while Navionics vector cartography hardly takes less than 200 MB. This is the price to pay to benefit from these great scanned images. Therefore expect an iPad with at least 32 GB if you want to navigate from the Mediterranean to the Caribbean through Brittany, and a good broadband connection for loading. Then everything will be on your iPad (except of course the external data : weather, tides and currents).

MaxSea is already planning future developments in its application. The next major release will probably see the connection to external instruments WiFi, file transfers (waypoints, routes and tracks files) with other applications, perhaps openness to other charting editors. We should see presented at the next Paris Boat Show. Thereafter, a parallel version is intended as a companion instrument supporting TimeZero, as multifunction displays Furuno NavNet 3D and Touch TZ. What is certain is that the application does not remain at an early stage.

Sincere hats off to developers of this application : Ergonomics, fluidity, simplicity and efficiency. An excellent use of graphics capabilities of the iPad, close to the work done for Weather4D. Bravo !

However I have long promoted the vector charting for use on tablet and smartphone. I find raster charting inappropriate to these new devices : too much storage space, obligation to superimpose layers while zoom for details, charts transitions inconvenient, As say I do not like it. For this reason I prefer the Navionics charting, C-Map (Jeppesen), Transas, and BlueChart versus Imray or MapMedia. The vector technology ENC (²) is really designed for computing. We lose in aesthetics but we gain in efficiency.

Despite this opinion is only mine, It is undeniable that TimeZero is now the sexiest navigation application available on iPad.

—
(¹) View this article actors mapping.
(²) See definitions in the Glossary.
—